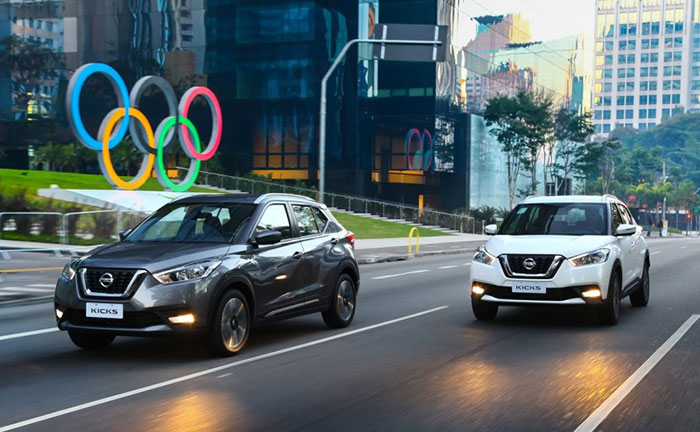 Nissan is using what is arguably the greatest sports spectacle in the world, the Rio Olympics to launch its Kicks compact crossover. The Nissan Kicks is the official car of Rio 2016 Olympic and Paralympic Games and as part of this partnership, made its first appearance on May 3rd as the lead vehicle of the Rio Olympics torch relay convoy across Brazil. The vehicle accompanied the torchbearers in their journey through 300 cities and towns across Brazil, which began in the city of starting in May in Brasilia and ended in Rio at the opening ceremony on August 5th.

The symbolic role of the Kicks as part of the torch relay convoy is in keeping with its status as the first all-new crossover that will be launched and sold first in South America. Just like the Kicks accompanied the torch relay in Brazil, the Nissan Cedric Special model carried the Olympic Torch in the 1964 Tokyo Olympics, after the model was launched in 1963.

The Nissan Kicks is inspired by the Nissan Kicks Concept, which made its debut at the International Motor Show in Sao Paulo in 2014. It uses elements from the cultures, styles and colors of Brazil and Latin America in its design and components. The Kicks was designed by the Global Design Center Nissan in Japan, in collaboration with Nissan Design America (NDA), studio in San Diego, California, and the design studio satellite office in Brazil, Nissan Design America – Rio (NDA-R).

The new Kicks uses Renault-Nissan’s Common Modular Family-B or CMF-B platform. This platform will also be used as the basis of the next generation of Micras and Sunnys. Available in two engine variants, the 1.6-liter petrol and 1.5-litre diesel, the model is pitched as a stylish compact CUV, a segment that is becoming more popular day by day. It comes with numerous innovations and gadgets like automatic climate control, a 7-inch infotainment system, and 4 cameras to help navigate and park the vehicle even in the really tight spaces that are available in crowded cities like Dubai.The model is being produced at the Resende Industrial Complex in Rio de Janeiro State.

Nissan was the first company to come up with the CUV bodystyle in 2003, with the launch of the Murano and all of its models in this segment, including the Murano, the Qashqai, the X-Trail and the Juke have been highly successful. The Kicks model has been launched in the Brazilian market and will initially be sold only in South America.