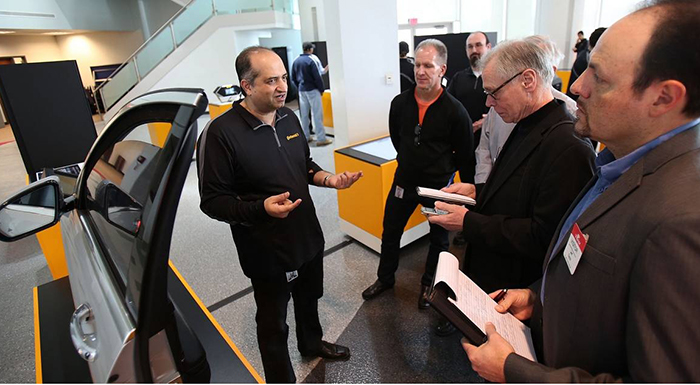 Soon, cars could have smart windows that automatically tint to keep the vehicle cooler during the summer season. A new front console may also be the next big thing boasting a customizable digital screen to control the radios, air conditioner, and heater, replacing some of the dials and knobs. Plus, a new fob could provide keyless entry and engine startup that works with the smartphone.

These, and a number of other technologies, are being pushed by Continental North America. With its Global Infotainment and Connectivity business unit, part of Continental’s Interior pision, headquartered in Deer Park, the company supplies innovative technologies to automakers in Detroit and anywhere else in the world.

In a statement, Scott Beutler, vice president of the Interior pision at Continental North America, said that a number of these solutions could begin in higher-end models and then migrate to other cars later. Revealing their findings, he noted that a number of drivers want new technologies, though usually older drivers are the ones who would purchase the higher-end cars.

Continental has been working on a number of technologies for cars, trucks and other vehicles worldwide. Just recently, the 25 new products displayed at the recently concluded CES in Las Vegas has been brought to Deer Park so the public could get a firsthand look at what was being developed in the community, which was the former home of Motorola Inc.’s automotive unit that was sold to Continental in 2006.

Beutler said that a number of those same Motorola executives have remained with the company to help make driving more comfortable, safer and more connected to the cloud.

He mentioned that the eHorizon system, which is a cloud-based technology, tells the driver what is on the road ahead, such as traffic jams or accidents. Anticipated to arrive in some cars by 2017, it warns drivers about issues on the road before they become visible.

“We’re also helping drivers to use their vehicle as a data source to send information back to a server and then that server can update the car’s navigation systems with better routes that can help reduce fuel usage or help drivers avoid dangerous situations,” Beutler added.

Continental also featured smart windows that can automatically offer tint to reduce sun rays from getting into the car, thus reducing the interior temperature. This could result in smaller, more energy efficient and lighter air conditioners in cars. Moreover, it could lead to the elimination of sun visors in the interior.

A curved center console where the radio, heater and other appliances are usually located was also showcased. A so-called Curved Centerstack System is anticipated to offer a touch display where the driver can customize the temperature, radio and other services on the same screen.

A number of these high-end technologies are anticipated to be in cars over the next three to five years.