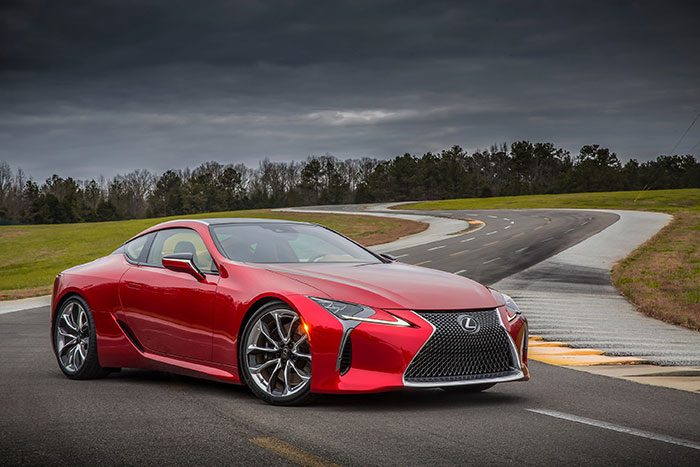 The all-new Lexus LC 500 luxury coupe made a remarkable debut recently by grabbing two awards for design excellence at the 2016 North American International Auto Show (NAIAS) in Detroit. The sporty luxury car received the 2016 EyesOn Design Award for Design Excellence in the Production Car category and for Interior Design.

Inspired by the Lexus LF-LC 2+2 Hybrid Sports Coupe, the LC 500 won the EyesOn award four years after the Lexus LF-LC won the same award for the best concept car. The NAIAS 2016 EyesOn Design Awards is meant for the best among all the production and concept cars debuting at the renowned Detroit show. The award winners are chosen by a prestigious jury drawn from current and retired design heads of automotive companies and heads of transportation design at the top art schools.

“I am so honored to receive the EyesOn Design awards for best interior design and for best production car from our design peers for the LC 500,” said Tadao Mori, Chief Designer of the Lexus LC 500. “The LC 500 is a clear result of the passion, hard work and collaboration between our designers and engineers for the future chapter of Lexus.”

The LC 500 is also notable for the fact that it is the first ever luxury automobile with a 10-speed automatic transmission. Equipped with the high-performing 5.0-liter V8 engine, the luxury coupe is the first Lexus model to use the brand’s all-new, premium rear-wheel-drive luxury platform, which has been designed to deliver outstanding performance and a sportier ride.

Takayuki Yoshitsugu, Chief Representative of Middle East & North Africa Representative Office, Toyota Motor Corporation said the accolades for the design of the LC 500 highlights Lexus’ attempt at raising the bar in the luxury car segment. The new model definitely sets a new benchmark, both when it comes to engineering and style. It also heralds a new, progressive design direction for Lexus.

The LC 500 shares many of the key elements, proportions and visual dynamism of the LF-LC concept car. When it came to the LC 500, the challenge for the Lexus design team was to collaborate with the engineering team and find a new dynamic design style to incorporate the advancements in technology.