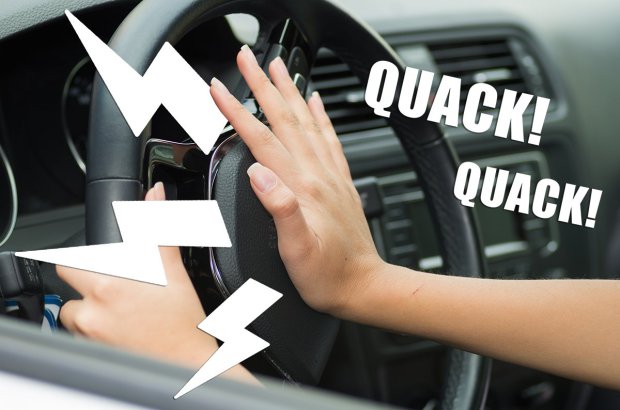 A car horn that quacks instead of making a blaring noise would probably life on the roads less stressful for motorists while at the same time alerting people about possible dangers. It would also reduce the level of noise on the streets. This is what Korean scientists who have been engaged in redesigning the classic Klaxon car horn that dates back to 1908 have to say.

The new car horn that they have developed sounds like duck and is meant to draw attention without sounding angry and aggravating road rage.

The scientists tested different sound variations on 100 volunteers before coming to the conclusion that the pedestrian-friendly “quack” was the best option.

Professor Myung-Jin Bae, of Soongsil University in Seoul, who led the team of scientists said that as part of the study, the team used the historic Klaxon sound source, but added a power controller to make modifications to its volume and rhythm with duration time. He said that the new horn sound while alerting pedestrians to the danger also reducing the unpleasantness and stress that a conventional horn sound would otherwise produce. The aim of the team was to come up with a horn sound that was noticeable but not too irritating.

The listeners who participated in the study were asked to evaluate different car horn sounds for the stress and loudness they caused. They were asked to rank the sounds on a five-point scale from bad to excellent and based on their ratings, a “mean option score” (MOS) was assigned to each sound. While the Klaxon offered the advantage of producing a loud noise at low power, it was not easy to control its volume.

Bae added: “In this study, when a driver presses a Klaxon, a loud sound of 110dB or more is not transmitted directly to a pedestrian.”

The researchers felt that a less abrupt car horn could also significantly enhance road safety as it is less distracting to drivers.

The team of scientists presented their findings at Acoustics ’17 in Boston, US.