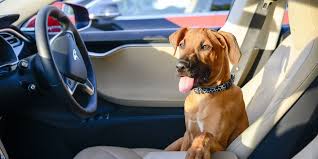 Elon Musk said in a recent tweet that he is considering the development of a dedicated “dog mode” to ensure that pets are safe in Tesla vehicles. When compared to conventional combustion engine powered cars, electric vehicles are safer for both pets and children as even when the vehicle is off, a safe interior temperature can be maintained for hours. Tesla had launched this feature back in 2016 to prevent cabin overheating, thanks to the large battery packs that are used in Tesla models. It is not possible to do this in the case of a petrol or diesel powered car.

According to Musk, who was responding to a request from a Twitter user, Tesla cars might soon get a dedicated “dog mode” that will alleviate any concerns that passersby might have when they see a pet in a Tesla vehicle. This mode, when turned on, could display a message and the interior temperature in the car so that passersby could be reassured that the pet is completely safe. This could prevent them from calling the emergency services or breaking windows to rescue the animal.

It is not yet clear how Tesla would go about implementing this feature. Tesla received this request as part of his drive to solicit feature requests for Tesla software updates.