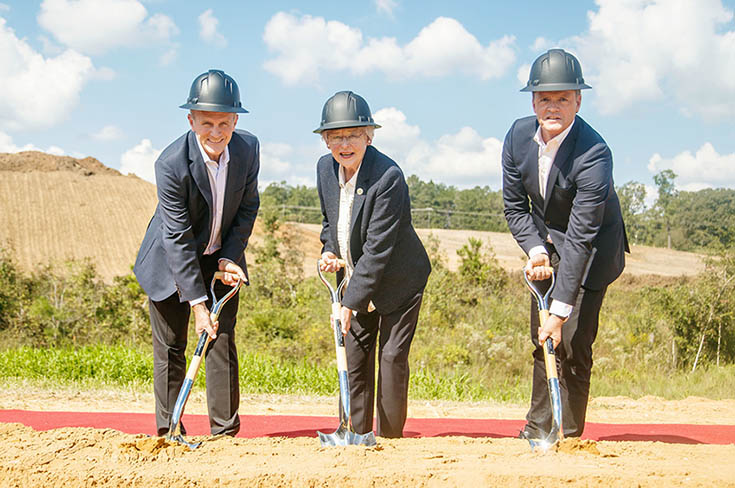 Mercedes-Benz has broken ground for a new factory that will be engaged in manufacturing batteries. The plant is located in Tuscaloosa, United States and will be located near a plant that will be making electric SUVs in the future which will be sold under the product and technology brand EQ. On the very same day that the ground-breaking ceremony was held, October 5, the first all-new Mercedes-Benz GLE, which is made using a completely new SUV platform came off the production lines.

Commenting on the new plant, Markus Schäfer, Member of the Divisional Board of Mercedes-Benz Cars, Production and Supply Chain said that the export oriented Mercedes-Benz plant in Tuscaloosa is a high-tech production facility that is meant to have an exciting future in terms of the growth of the Mercedes-Benz brand in the United States. The German automotive manufacturer plans to play a pioneering role in the development of e-mobility and is highly prepared to accomplish this mission. Last year, Mercedes-Benz had announced a USD 1 billion investment in Tuscaloosa. This amount would be used mostly for the production of electric SUVs and the battery plant and would thus bring electric mobility for Mercedes-Benz to the United States. Across the globe, the company is preparing six sites for production of EQ models and the battery network will span eight factories.

Mercedes-Benz has already invested over USD 6 billion in the Tuscaloosa plant from 1995. The additional USD 1 billion is expected to help Mercedes-Benz Cars expand its industrial footprint in the region, mostly for electric vehicles. These investments are expected to create over 600 additional jobs in Alabama.

With the addition of the new battery facility near the Tuscaloosa plant, Mercedes-Benz will have a a global battery production network a total of eight factories in Kamenz, (Germany), Stuttgart-Untertürkheim (Germany), Sindelfingen (Germany), Beijing (China), Bangkok (Thailand) and Tuscaloosa (USA).

This worldwide network of battery factories will help Mercedes-Benz to cater flexibly and efficiently to market demands and requirements. The different sites will support local vehicle production and will also be able to produce batteries for export, if needed.

The plant in Tuscaloosa will serve as the base for making the GLE, GLS and GLE Coupe SUVs around the world, as well as the C-Class sedan for North America. In 2017, the plant made about 300,000 vehicles.