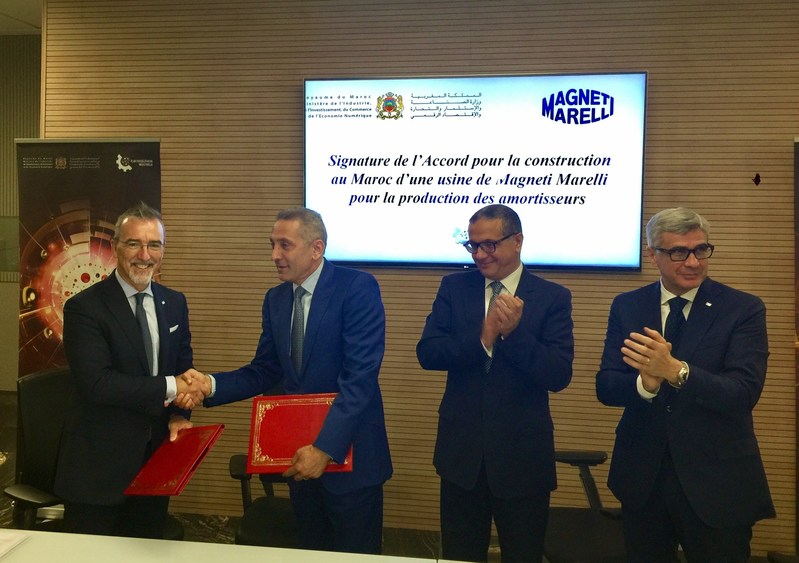 Magneti Marelli Signs Agreement to Set Up Factory in Morocco

Renowned automotive supplier Magneti Marelli has signed an agreement with key officials in Morocco to set up a manufacturing facility in the country.

The plant which will require investment to the tune of Euro 37 million (USD 43.6 million), and will cover 20,000 square meters will be located in the city of Tangier in northern Morocco and will specialize in the production of shock absorbers for light vehicles and commercial vehicles. It is expected to become operational by 2019.

When it attains full capacity, the plant will have an annual output of 6 million units, and will have a workforce of about 500 people by 2025. It is quite likely that the plant will be upgraded to make other products in the future.

Commenting on the new plant, the CEO of Magneti Marelli Pietro Gorlier said that the creation of a new industrial site in Morocco will give the company an opportunity to further expand its business, and cater to the needs of a number of major clients which are making important investments in the region.

Speaking about the agreement, M. Moulay Hafid Elalamy, Morocco’s Minister of Industry, Investment, Trade and the Digital Economy said, ‟The Magneti Marelli project feeds the manufacturing and sourcing ecosystems in the context of (Morocco’s) industrial accelerated plan. He said that with this new project, a new craft would be developed in Morocco, and the value chain would become more complex. The automotive sector would benefit from a successful integration.”

Magneti Marelli is a subsidiary of Fiat Chrysler Automobiles that specializes in the design and production of advanced systems and components leading automotive manufacturers across the globe. The company has 43,000 employees across 86 production facilities and 12 R&D centers in 19 countries.