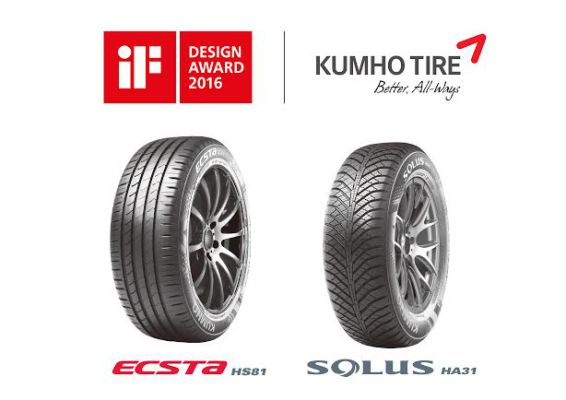 Two tires from Kumho Tire Co. won awards at the 2017 iF Design Awards for their design and concept in the “transport device discipline” category.

The iF design award is one of the most well known design contests in the world. The awards were instituted in the year 1953 and are given on an annual basis. Manufacturers and designers from different parts of the world send in their entries for their original products made during that year and a panel of design experts carefully evaluate each entry to choose the winners.

Two of Kumho’s tires, namely the Ecsta PS71 HP tire and the “Smasher”, which is a futuristic concept tire, were chosen as winners at the 2017 edition of the iF Design Awards.

Speaking about the awards, Chung Taek-gyun, head of Kumho Tire’s R&D division said that Kumho has been consistently recognized for its innovation and design excellence. In 2016, the company won four of the most well design awards in the world including the iF Design Award, the Red Dot Award of Germany, the IDEA Award of the United States and the Good Design Award from Japan in 2016. The iF Design awards this year further highlight Kumho’s outstanding design capabilities.

Chung Taek-gyun concluded by saying that Kumho would continue to focus the company’s research capabilities on developing designs that will differentiate its products from those of its competitors.