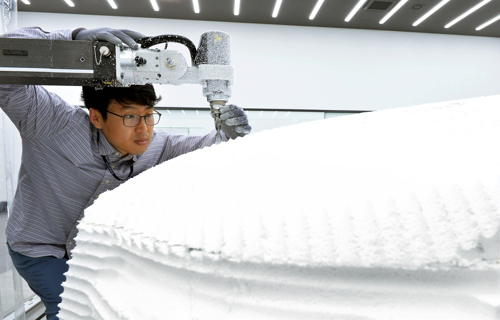 Hyundai Mobis, the Hyundai subsidiary that is the largest manufacturer of automotive components in South Korea has opened a 3D-printing lab that has the capacity to make customized parts for a full size car.

The new lab which is called the Design Model Workshop required an investment of 3 billion won (USD 2.8 million) to set up. The facility covers an area of 430 square meters site at the company’s Mabuk Technical Center in Yongin, Gyeonggi Province.

The new facility is equipped with advanced design facilities, including clay modeling machines and powder-based 3D printers. Designers can use the state-of-the-art equipment to make full-sized cars in clay and attach auto parts made from the 3D printers.

According to a Hyundai Mobis official, such design studios which are meant specifically for auto parts are rare even on a global basis.

The purpose of setting up the new lab was to test out different auto parts on a new car model before it is launched in order to find the best fit, according to Hyundai Mobis. The use of 3 D printing could make the design process more streamlined as all the stages in the design process like car modeling, sample design and editing could take place in one spot. Designers would also have a better idea about how far they have got when they examine the designs in real size and not on a monitor screen.

The company said the 3D printers would allow it to significantly cut down on time and costs.