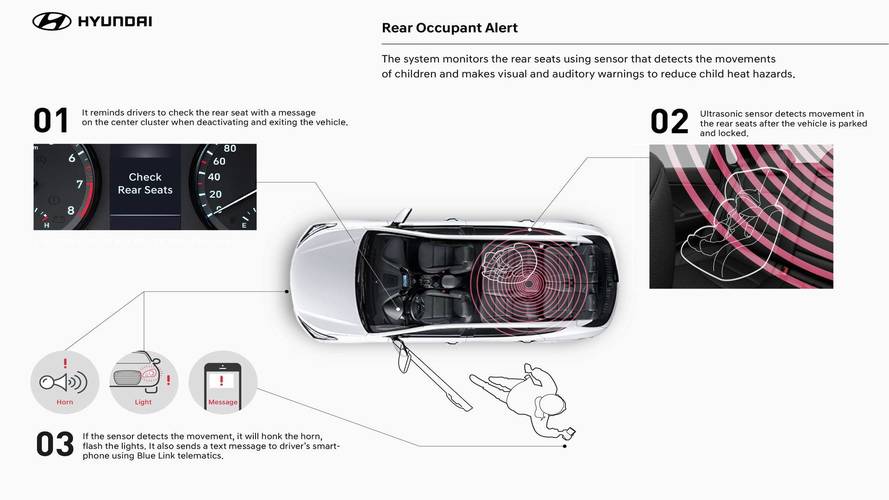 Unfortunately, we hear of many instances every summer where children die in hot cars when they are left behind by adults. Hyundai has joined the growing list of automakers, including Nissan and General Motors who have developed rear seat reminders to help ensure that this never happens.

Hyundai’s rear seat reminder comprises an ultrasonic motion sensor for detecting movement that is mounted in the rear of the vehicle. The sensor becomes active when a vehicle is parked and locked. If any movement is detected after the vehicle is locked, the sensor will activate to make the horn sound and the lights flash. The system is linked to Hyundai’s Blue Link connected car service, and will automatically send a text notification to the driver’s smartphone.

Another feature of the system is that a notice reminding motorists to check their rear seat will appear in the message center of the instrument cluster every time the vehicle is shut down and the doors opened. While the rear seat reminders offered by other automakers are passive reminders, Hyundai’s rear seat reminder is different and will definitely help reduce the risk of hot car deaths. So far, in the summer of 2017, 37 children have died in the United States after being forgotten in vehicles by their parents or guardians.

According to Hyundai, this technology will be deployed in its models that will go on sale from 2019. The car maker did not disclose further details about which models and which trims would be having this new technology.