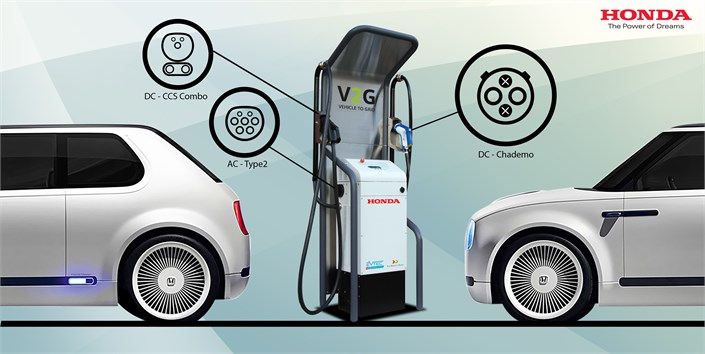 Honda has invested in highly innovative vehicle to grid or bi-directional charging technology at its R&D center in Offenbach, Germany. The new charging system will serve as a means to test the hardware for possible use in private households in the future.

The use of this equipment represents a significant advance after Honda unveiled its Honda Power Manager Concept at the 2017 Frankfurt Motor Show in September. The concept involved fully-integrated energy transfer, involving taking power from the grid and then returning the stored energy from electric vehicle (EV) batteries through the use of ‘Vehicle-to-Grid’ or ‘V2G’ technology. The installation of the latest equipment involves the same technology, albeit on a larger scale.

Electricity is either drawn from the grid or is generated by photovoltaic solar panels. The electricity thus obtained is used to charge EVs which are plugged into the system. While an EV is plugged in, the energy that is stored in its battery can be transferred back in the event that the grid needs to be stabilized ot there is surplus energy in the battery.

Jörg Böttcher, Vice President of Honda R&D Europe, said that the installation of the latest bi-directional charging technology at Honda’s R&D site in Germany is the next step in its Smart Company project and will serve to enhance its research activity in the field of zero-emission society and future mobility.
The purpose of using this technology is to optimize energy management at Honda’s European R&D center and especially to maximize the use of renewable solar energy. The project involves testing the interaction, compatibility and power flow between specific electrical components, including the renewable energy cells and the EV batteries. Honda is working with The Mobility House and Swiss technology company EVTEC for the project.

Honda had launched what it termed the most advanced public charging station for plug-in vehicles, at Honda R&D Europe in summer 2017 and the use of the new technology will further enhance this facility. Its state-of-the-art 940V capability can deliver up to 150kW of energy, enabling as many as four vehicles to charge simultaneously with different types of connectors. The EV charging station has supplied power for 447 charge sessions and has saved 3.87 tons of CO2 since its opening in June.