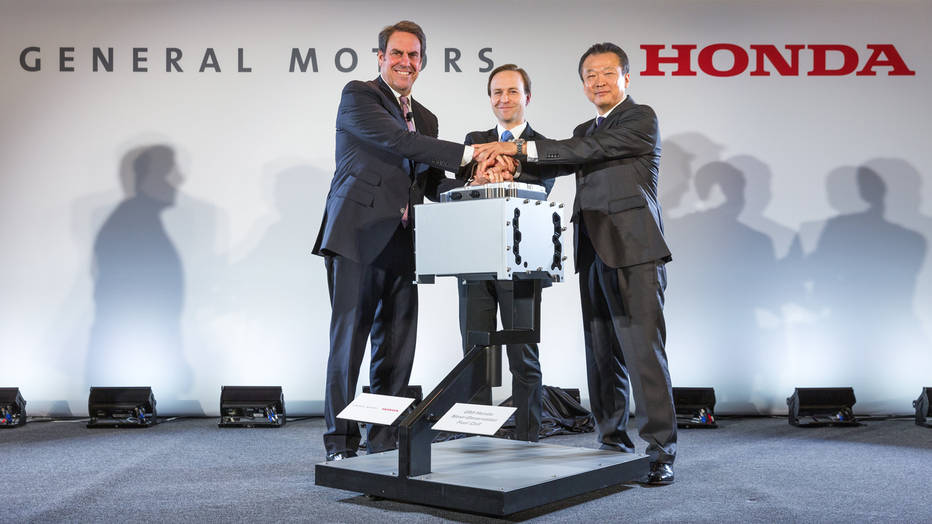 General Motors and Honda Motor Co. have announced that they will be collaborating with a view to building hydrogen fuel cell vehicles by 2020. The two companies will invest USD 85 million to build hydrogen fuel cell stacks for technologically innovative green vehicles at a factory in Michigan, and will in the process create 100 new jobs. The project will be a 50-50 joint venture called Fuel Cell System Manufacturing and will be making the vehicles at GM’s factory in Brownstown Township, Michigan by the end of the decade. At this plant, general Motors is already making battery packs for hybrid and electric vehicles.

The two companies had first announced the joint venture back in 2013 and this is and said that working together on developing a next-generation fuel cell vehicle will help them to cut costs and boost operating efficiencies. The goal of the venture will be to develop a lighter, smaller, more powerful and less expensive stack which will use hydrogen as the fuel to produce electricity that will power cars. Both companies will be using the jointly developed fuel cell in distinctly different models of each company. The fuel-cell stack will be a plug-and-play fuel cell system that is ready for installation. It will comprise the stack and all the related cooling, fluid, gas and electrical components, which will be assembled into a module. The two companies will develop the battery, electric motor and hydrogen tanks independently.

Speaking about the venture, GM Executive Vice President Mark Reuss said that experts  at both companies worked together as one team in different time zones and locations to get them to this point in the process.

It was decided to develop the fuel stacks in the United States as it is expected to become one of the biggest markets for fuel cell vehicles due to increasing stringency when it comes to emissions norms.

Honda had launched its Clarity fuel cell vehicle in Japan in spring 2016 and this model’s fuel cell stack is essentially handmade at a Honda workshop in Tochigi, north of Tokyo. Honda will be phasing out production of fuel cell stacks in Tochigi after the launch of the joint venture fuel cell. It is not clear yet whether the stacks that will be made in Michigan will be made by hand in small batches or will be made on a fully automated line. Automated production will play a key role in cutting costs. The joint venture project will get a USD $2 million economic development grant from the state of Michigan.

The fuel cell stack that will be developed as part of the joint venture will get inputs from engineering teams at GM’s research center in Pontiac, Michigan and at Honda’s global tech center in Tochigi.

Fuel cells use hydrogen and oxygen to generate electricity through a chemical reaction and harmless water vapor is the only byproduct. Toyota, Honda and Hyundai are companies which offer fuel cell vehicles in markets like Japan, California, Korea and a few European markets.

The main hindrances to large scale use of fuel cell vehicles are the issues of fueling and refueling, the high cost and the complex manufacturing process of the stack. The stacks need to be assembled in a highly sterile environment.

I tis likely that the fuel cell systems produced by the new joint venture is sold to other companies in order to increase volume and cut costs. They might also be sold to non automotive clients as back-up power sources.

“With the next-generation fuel cell system, GM and Honda are making a dramatic step toward lower cost, higher-volume fuel cell systems,” said Charlie Freese, GM executive director of global fuel cell activities. “Precious metals have been reduced dramatically and a fully cross-functional team is developing advanced manufacturing processes simultaneously with advances in the design. The result is a lower-cost system that is a fraction of the size and mass.”