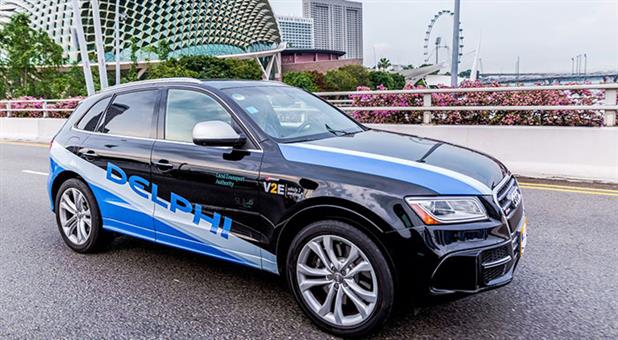 Singapore is likely to be the venue where the future of urban transportation will make its world debut in in 2017. The government is doing its best to promote personal mobility by joining hands with tier-one automotive supplier Delphi and Singapore-based startup nuTonomy to run a pilot program for autonomous vehicles. The government will supply the needed infrastructure while the two companies will handle the technological aspect. The program will run from 2017 through 2019.

As a part of the pilot test, Delphi will provide a fleet of automated taxis. Engineers, who will act as safety drivers will accompany selected commuters in the first phase of the pilot test. By the time the project comes to an end in 2019, the company hopes to launch driverless pods in a small, controlled section of the city state.

Delphi began discussions with the Singapore Land Transport Authority after it successfully made a a transcontinental run in an autonomous Audi SQ5 prototype in April 2015. It has a Software and Services business unit that was established recently and will act as a general contractor in the project, to liaise and coordinating all aspects with the company’s product development team and five or six companies who will be the primary partners in the project.

Speaking about the pilot project, Glen De Vos, vice president of Delphi’s services business unit. Said that the company created the services business unit to focus on things like connected services, all of the off-board, off-vehicle analytics and automated driving. According to him, this is one of the most exciting periods in the automotive industry.

De Vos was speaking about the major advances that has made autonomous driving capability increasingly ready to be used in the real world. It is definitely a technology that can change the landscape of urban traffic and personal mobility. In combination with the use of electric powertrains, connectivity and cloud services, automation could make a considerable impact when it comes to road safety, accident rates, reducing energy use and improving traffic flow.

A lot of work, however needs to be done before urban and personal mobility become a reality. Singapore is an ideal location for the project in view of the fact that it has a high population density, with well developed infrastructural facilities and warm weather all through the year. These factors will make it easier for vehicles to navigate around the test area. In many trials, autonomous vehicles have faced weather related issues Singapore residents frequently take taxis to get around town and even to get to mass transit stations. A prior test of autonomous vehicles in Singapore revealed that weather related factors will not affect the project

The first phase one of the pilot program will be held in the One North of the island with six Delphi vehicles that will be built soon. As per De Vos, Delphi engineers will soon select a base vehicle, most likely an an electric vehicle with seats for four to six people. In tests so far, Delphi has used the Audi SQ5 crossover as its development platform, but the Audi SQ% crossover has a lot more power than what the vehicles for this project need as speeds are expected to remain between 25 to 30 mph. The most likely models to be used for the pilot project are the Nissan Leaf, the Chevrolet Bolt, Nissan Leaf or the Tesla Model S.

Singapore-based startup nuTonomy has already been in the news for testing its very own autonomous vehicle technology in the city. Eventually, nuTonomy hopes to have its own fleet of five to 10 cars running as part of a mobility service by 2018.

After the project is completed in 2019, Singapore is planning on the deployment of a second, larger fleet using a vehicle that has been specifically designed for autonomous driving.