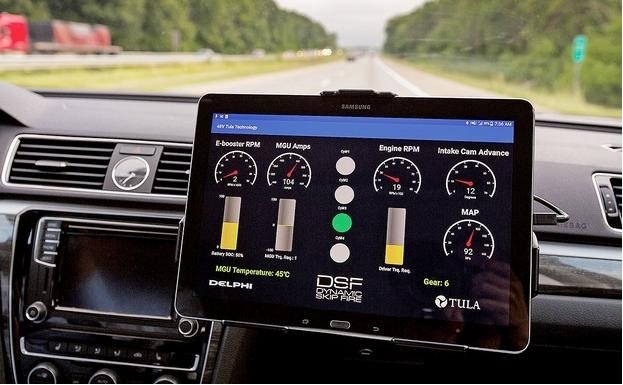 Delphi has developed a fuel saving technology that it is pitching to automakers as an alternative to manufacturers of diesel vehicles. The company believes that the solution is to combine two innovative fuel saving technologies that can increase the efficiency of internal combustion engines by as much as 19 percent. If all works out as planned, automakers will no longer have to rely on diesel engines which are responsible for a high level of harmful emissions in order to meet global fuel economy regulations.

With norms becoming more rigid regarding CO2 emissions, Delphi’s solutions will appear to be increasingly attractive.

Delphi officials said that gasoline engines which use the two new technologies can still deliver the  low-end torque and high efficiency that drivers of diese vehicles are used to.

Delphi’s system involves use of a 48-volt mild hybrid system in combination with a new type of cylinder deactivation that it calls Dynamic Skip Fire. Harry Husted, Delphi’s director of powertrain engineering said that when used in tandem, these two technologies can increase fuel economy by as much as 19 percent on the EPA’s city cycle test and 14 percent on the highway. Though they are unlikely to be available in vehicles before 2020, both systems are ready for production.

While the 48-volt system and Dynamic Skip Fire can also be used separately, they complement each other by increasing engine efficiency at both low and high speeds and thus create synergy.

General Motors is one of the first companies that is likely to adopt the new technologies when it uses Dynamic Skip Fire for its new Chevrolet Silverado and GMC Sierra that it will launch in late 2018. The technology would replace GM’s current cylinder deactivation system, which boosts fuel efficiency by cutting off four cylinders of a V-8 engine and two cylinders of a V-6 when they are not needed.

GM and Delphi have stakes in Tula Technology, which developed the software for operating Dynamic Skip Fire. Delphi makes engine components for the system.

The technologies are more likely to be in great demand in China and in Europe where pollution from emissions is a major concern.