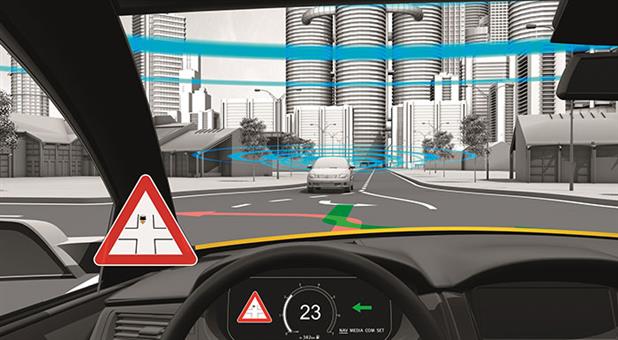 Leading automotive components manufacturer Continental is planning to showcase several examples of connected technology that the company has developed for commercial vehicles at the upcoming 2016 International Motor Show Commercial Vehicles (IAA Commercial Vehicles) in Hanover. One of the most notable examples of this is the ContiPressureCheck system. The ContiPressureCheck helps motorists to continually monitor the pressure and temperature of all tires on the vehicle using sensors inside the tires. Data is continuously recorded and can be seen by the drivers on a display. The driver is immediately notified if the tire pressure deviates from the normal values, and can proactively take steps to restore normal tire pressure. Thus when it comes to commercial vehicles, drivers can use the ContiPressureCheck system to reduce tire wear and minimize fuel consumption while increasing tire life. In the long run, this also helps to reduce the operation costs of fleets while enhancing safety levels for both the vehicles and the drivers.

Another important advantage of the ContiPressureCheck system is that it is easy to install and can even be retrofitted when tires are changed. It is also compatible with a wide range of telematics systems.

Conti has developed the dynamic eHorizon, which is a sensor system that supplies vehicles with real-time information on the current traffic scenario in order to adapt the handling performance. In the period from 2012 when it was launched, trucks using the Horizon system from Continental have saved nearly 300 million liters of diesel, or around 383 million Euros. The system uses a GPS signal and highly accurate topographical route data to provide vehicles with accurate information about the route ahead so that they could modify the driving style and speed according to the flow of traffic. The dynamic eHorizon is final stage of the product and takes into account factors such as accidents, the weather and traffic jams.

Speaking about DOC, Dr Markus Distelhoff, Head of the Fuel & Exhaust Management Business Unit of the Continental Powertrain pision said earlier positioning the DOC in close coupled position to the engine in heavy commercial vehicles was considered to be impossible due to the lack of space. Continental however came up with significantly lightweight and efficient catalyst substrate and it is now possible to achieve compact, square geometries that can be placed close to the engine.

Now the new reduced material is used in the DOC, while the close coupled catalytic converter solution has the same high level of overall system efficiency. It is also more cost-effective than previous exhaust gas aftertreatment solutions, which were fitted to the chassis between the axles. The decreased volume requirement at this point can benefit the tank volume.

Now it has become routine to install the DOC near the engine in diesel passenger cars. However, this position for the DOC cannot be adopted so quickly for heavy commercial vehicles as the underlying chassis has a very long service life. It is for this reason that the first step towards installation close to the engine can only take place using particularly compact catalytic converters.