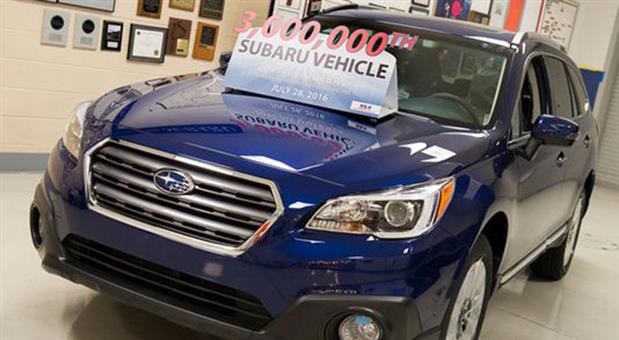 Subaru, the subsidiary of Fuji Heavy Industries that specializes in passenger vehicles announced that its factory in Indiana had achieved a landmark milestone when its 3 millionth American-built Subaru, a Subaru Outback in Lapis Blue Pearl came off the production line on July 28.

Subaru has been making cars at its manufacturing facility in Lafayette, Indiana from September 1989. The plant was initially opened as a joint venture with another Japanese manufacturer, Isuzu, but eventually Subaru assumed full ownership pf the facility. The plant initially dealt with the production of Legacy sedans and wagons and went on to specialize in the Baja, the Tribeca and the Outback.The vehicles built at the plant are meant mainly for the US and Canadian markets.

Eventually, Subaru plans to upgrade the factory to cater to the growing demand. By March 2019, the capacity of the Lafayette plant will be ramped up to 436, 000 units from its current capacity of 218,000 units. Towards the end of 2016, Subaru plans to begin production of the Impreza and also has plans to begin production of an unnamed three-row crossover in 2018.

SIA was the first auto assembly plant in America to achieve zero landfill status, and SIA’s entire site has been designated a Backyard Wildlife Habitat by the National Wildlife Federation.