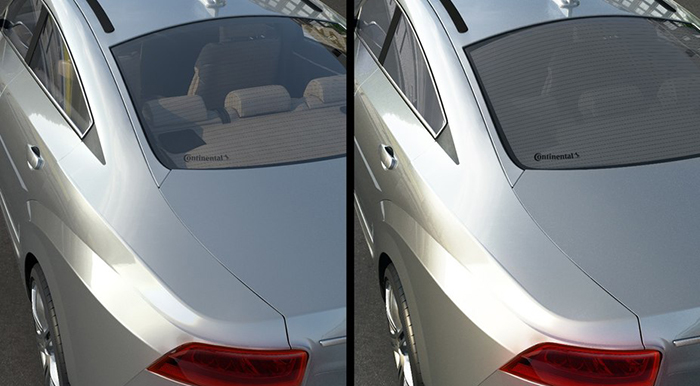 Tinting car windows will never be the same again now that Continental has developed a revolutionary technology that makes the process as quick and easy as 123. Called ‘Intelligent Glass Control’, it uses the application of, or lacks of, an electric current to specially made glass, providing not just privacy and comfort but also safety and emission benefits.

Variable glass tinting for vehicles has been feasible for some time, with Hino Motors showing a take on it in 2007, for instance. However, Continental claims that the technology has only been possible in the roof area of a small number of luxury cars and that its test vehicle showcases the technology used for rear windows, side windows and windshield for the first time.

According to Andreas Wolf, the head of Continental’s body and security unit, the technology can provide privacy, increase comfort and enhanced safety for vehicle occupants. He explains that it cannot only reduce the effects of bright glare or sunshine, but can also eliminate impaired visibility and reduction in vehicle control of a driver adjusting the sun visor.

Moreover, the technology is claimed to help decrease energy usage. Through the reduction of solar radiation, it can keep the vehicle interior cooler than would otherwise be the case, thus reducing the need for air conditioning.

Wolf concludes that their calculations have revealed that the CO2 emissions are reduced by four grams per kilometer, thereby increasing the range of EVs by approximately 5.5 percent.

Continental’s all-new window tinting technology could be developed to change automatically in future, based on external brightness for instance. The currently used film reportedly has a slight blue shimmer, but an array of other color options are anticipated. Furthermore, features such as touchscreen functionality and energy recovery may also be feasible.

Continental has not yet disclosed any cost details, but describes the film as being cost-intensive. However, the German company anticipates the prices to plunge quickly, due to rivalry from other similar technologies. It believes it does not matter which technology succeeds, with the value being in the connection and software expertise.

A car featuring the Intelligent Glass Control will be exhibited at the 2016 Consumer Electronics Show in Las Vegas which will run from January 6 to 9.