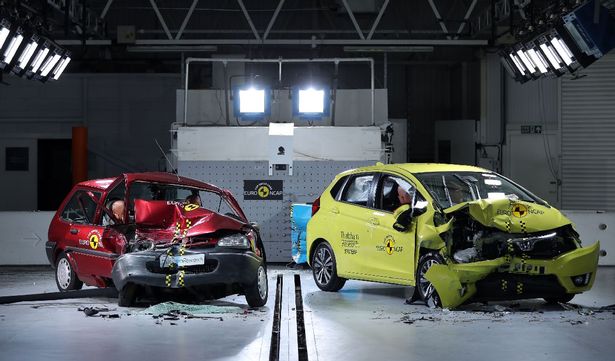 Car Safety has Come a Long Way in Just 20 Years

In order to mark the 20th year which Europe’s New Car Assessment Program began crash testing vehicles, the organization uploaded a video showcasing the difference in safety between a 1997 Rover 100 and a 2017 Honda Jazz. Both vehicles were crashed into a metal barrier at 40 mph, and the results were just stunning.

The 1997 model offered minimal protection to its passengers. Though it had airbags, the crash test dummies were poorly restrained and the driver slid around them. As a result of the crash, the doors buckled and the engine was driven into the passengers legs. The doors became so crumpled that life saving crews would have difficulty getting through to the passengers to save their lives.

The Honda does suffer a lot of damage in the crash, but the dummies fare a lot better.  The side cushion airbag helps to reduce the impact of the crash on the driver and the metal frame on the passengers side remained in place and retained its shape. The crash did not have much impact beyond the windscreen

There is a general perception that larger cars are safer than smaller cars. The test served to highlight the fact that as a result of regular testing, small cars have become a lot safer than they were 20 years ago. This why the rate of fatal crashes has deceased drastically in the past two decades (from 1.71 per 100 million miles driven to 1.08), as a result of structural improvements and improvements to safety equipment and technologies like airbags.

It is felt that the advent of autonomous driving technology will go a long way towards reducing human error which causes crashes and make cars safer. Self-driving features like automatic emergency braking systems, are expected to become standard in the US market by 2022. Meanwhile incremental advances in technology like Lane Keeping Assist and updated chassis structures are going a long way towards making us safer on the roads.