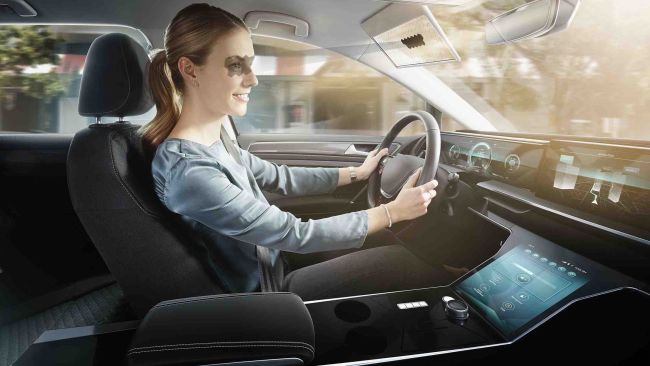 Leading German supplier Bosch showcased a sun visor called Virtual Visor at the 2020 edition of the Consumer Electronics Show. Virtual Visor is powered by artificial intelligence and through development of this product, Bosch has significantly transformed a component that has not changed much from the early days of motoring.

The Virtual Visor is a rectangular shaped component that automatically swings down from the headliner in order to block light from the sun. It integrates an occupant-monitoring camera that keeps tabs on the level of sunlight in the vehicle by tracking shadows across the faces of the front passengers and is essentially a transparent LCD screen. Artificial intelligence is used for the identification of facial features, like the nose, the ears, and the mouth. This data is then used to tint only the parts of the visor through which sunlight hits the passenger’s eyes. The outcome is a shadow that looks like a robotic Venetian mask. The rest of the screen remains transparent.

The change to the visor might not seem like much, but the development of this sun visor is expected to have a significant impact on safety, especially at dawn and at dusk. Bosch conducted research which indicated that glare from the sun causes nearly twice as many accidents as other weather-related conditions. This research is supported by statistics from the National Highway Traffic Safety Administration in the United States, with the agency attributing thousands of accidents every year to glare from the sun.

Bosch did not invest a lot on development of this breakthrough technology. The idea was developed by three forward-thinking powertrain engineers. They even made the original prototype using an LCD screen they found in a trash bin.

Bosch executives liked the idea and gave the group approval to proceed with the project. The Virtual Visor is still at the concept stage, but Bosch is involved in talks with automakers about bringing the technology into production.