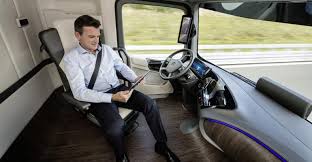 A survey conducted by Bosch and Innofact AG in the runup to the IAA Commercial Vehicles show in Hannover revealed that Germans would feel safer with fully automated, driverless trucks on the road.

Currently, driverless trucks are yet to become a reality. The survey however portends well for the future and indicates that many people in Germany feel that automated trucks have an edge in terms of safety. They felt that the intelligent technology installed on board such trucks could contribute to less accidents as in nine cases out of ten, accidents can be attributed to human error.

Bosch has a clear vision when it comes to road freight of the future: Vehicles that are not just accident-free, but are also hopefully free of emissions and will cause less stress in all road users. Currently, when they are stuck in traffic, most people find trucks and vans very annoying. 57 percent of the respondent to the survey felt unsafe in critical situations involving trucks, like when they merged onto the freeway or when a truck turned.

Over 50 percent of them (56 percent) felt that there were just too many road freight vehicles on the road while about half of them felt that trucks blocked traffic while parking. Other complaints related to trucks included commercial-vehicle emissions (50 percent) and truck noise (43 percent). Only one in five respondents said that they were not particularly bothered by truck traffic.

Another fact that the survey revealed is that very few people are willing to do anything on their part to relieve delivery traffic on the road. Three-fourths of Germans (73 percent) were not willing to give up or do less online shopping. Few (49 percent) were willing to compromise and accept longer waiting times for parcel deliveries as another way to relieve traffic. They preferred daily parcel delivery to delivery once in a day as that is more convenient.

One in four respondents (27 percent) were however willing to reduce delivery traffic by returning fewer goods, while 36 percent said they were amenable to having their parcels delivered to a central parcel station or collection point where they could pick them up themselves.

Paying more for parcels to be delivered to be delivered during off times like evening deliveries so as to spread traffic throughout the day is something that only 15 percent of the respondents found acceptable.

A Shell study indicated that road freight is slated to increase by another 50 percent by 2040. This makes it even more important to come up with technologies like automated trucks to reduce congestion and prevent accidents.