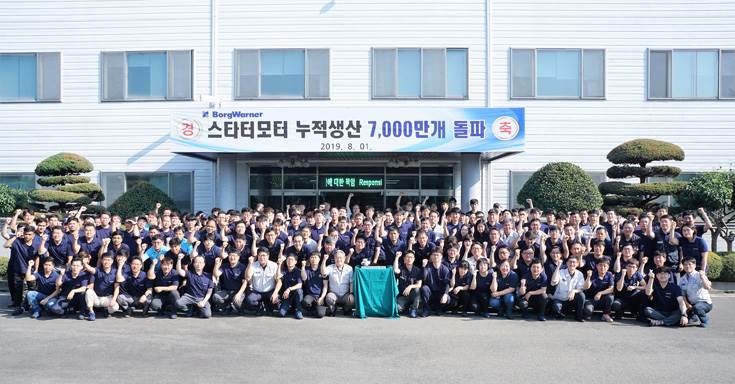 BorgWarner Crossed a significant production milestone recently. The achievement was made at the company’s plant in Changnyeong, South Korea, when it completed the production 70 million starters. To mark this great achievement, all the employees at the plant came together for a one-day celebration. The 70 millionth starter was given to the employee who made the first product ever at the Korean facility.

Dr Stefan Demmerle, President and General Manager, BorgWarner PowerDrive Systems said commenting on the milestone, “We at BorgWarner are proud to achieve this goal as it shows the success of our starter technology. We combine state-of-the-art technology and extensive engineering expertise with local production for our customers,“.

He went on to thank the company’s employees in Changnyeong and said the milestone could not have been achieved without their dedication and the excellent work they have done during the past 22 years. He expressed his hope that their commitment would make it possible to reach the 100 million mark by 2029.
BorgWarner’s plant in Changnyeong began to make starters starters in December 1997. The business grew at a rapid pace by providing global OEMs with the advanced and highly efficient components made at the plant. The factory achieved its first milestone in May 2002, when 10 million starters were manufactured. Till now, the plant has catered to the needs of 43 OEMs spread across 21 countries.

According to BorgWarner, its starter motors are characterized by their robust drive system and ability to tolerate even the most extreme thermal conditions imaginable.