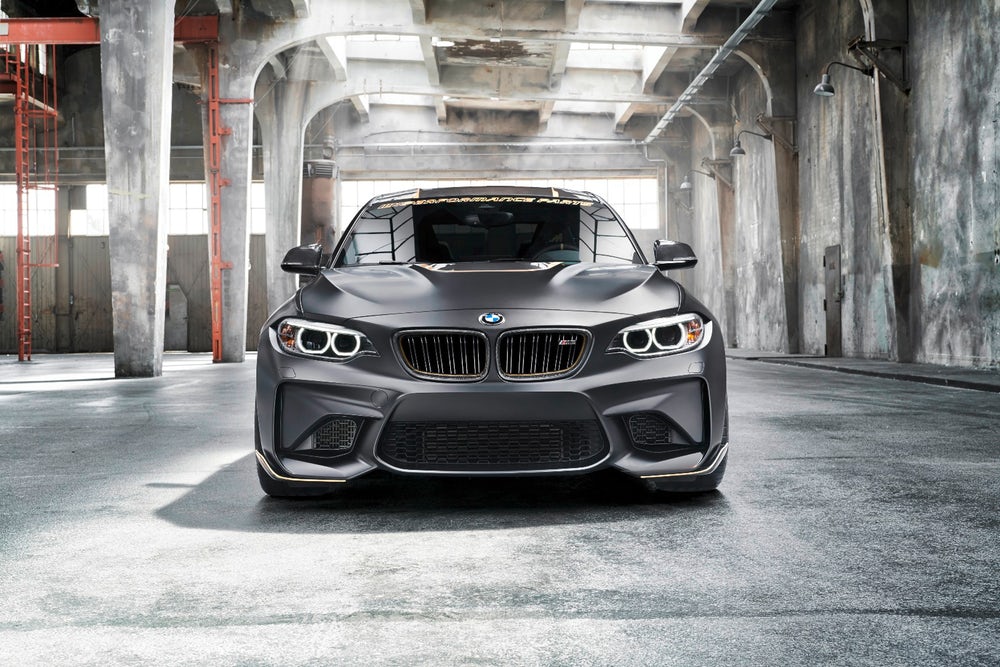 BMW used the Goodwood Festival of Speed to introduce an M Performance Parts conceptual. The car showcased how the BMW M2 could be customized with knowledge based on motorsports for lightweighting. The concept weighed over 60 kg (132 lb) less than the production model.
The BMW M Performance Parts Concept used a lot of carbon fiber, right from the grille to the rear bumper.

Other parts of the M Performance Parts concept which were made of carbon fiber included the front winglets, front side panels, the side sills which had gold accents and the roof of the vehicle. The use of carbon fiber in these parts further reduced the weight of the car and reduced its center of gravity. BMW used M Performance forged Y-spoke 763M wheels in Frozen Gold for the wheels, and these wheels sported semi-slick tires. The wheels were 6 kg lighter than the standard wheels for the M2. The tailgate and rear diffuser were also made of carbon fiber, saving another 5 kg of weight when compared to the original model.

When it came to the interiors, the BMW M Performance Parts Concept featured a combination of carbon fiber fitments and Alcantara upholstery in sport-tuned highlights. The sports seats fashioned from carbon fiber stayed true to the golden edge theme with gold stitching, and reduced weight further by 9 kg. The rear seats in the vehicle were also made of carbon fiber and lightweighted, and were 13 kilos lighter. The finishing touches to the concept included an M Performance steering wheel, carbon fiber handbrake, and velour floor mats.

With regard to the structure of the vehicle, the M2 concept had M Performance suspension components. The battery was lightweight and contributed to lightweighting with savings of 14 kg. The total lightweighting added up to 60 kg.
Almost all the components used in the BMW M2 Performance Parts Concept is either currently available or will be available shortly from BMW’s M Performance division as upgrades to production vehicles.