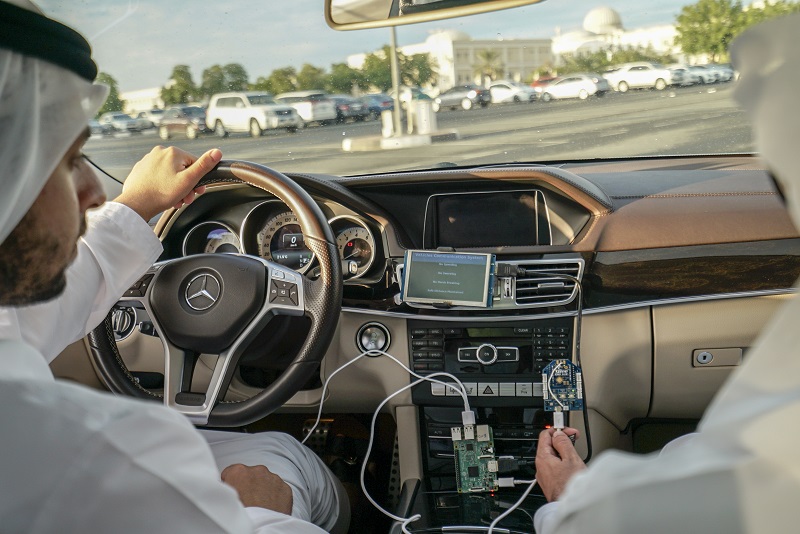 Four Emirati students from the Department of Computer Science and Engineering at the American University of Sharjah (AUS) have conceptualized and developed an innovative  project that can significantly reduce the rate of car accidents in the UAE.

The “smart system” that they have developed can helps drivers learn more about the activities of other drivers in their vicinity. The device that they have developed is simple and affordable and immediately notifies them of any untoward driving behavior within a radius of their choice. This radius can extend to several kilometers. Thus, drivers will become more alert with regard to threats from other motorists and reckless driving behavior like frequent braking, swerving, tailgating, and speeding.

Commenting on their efforts, and the system they developed, Dr. Aloul said that some of the top reasons for fatal car accidents are swerving and speeding by reckless drivers. The new system covers these two issues and can thus help to reduce the accident rate in the UAE and even globally.

He added, “This device is a simple yet effective and cheap solution and can make an enormous difference for drivers.”

Dr. Zaulkernan said that with the advent of self-driven vehicles, the next version of the system would allow cars to automatically react to anomalous behaviors of nearby vehicles and thus help prevent accidents.

Saud AlQasimi, the student leader said that car accidents are one of the top causes of death in the UAE, and the aim of the project was to reduce these horrific numbers by warning vulnerable motorists about road hazards like an over-speeding vehicle, sudden braking, tailgating, and even a swerving vehicle by making it possible for vehicles to send and receive messages wirelessly. He said that the team came up with a solution that is cheap and universal to all vehicles so that it can be easily installed in all vehicles as a standard safety mechanism.

The device comprises several components and it can be connected to the car’s dashboard to get data about speed, brakes, engine reading, etc. Once this data is obtained, the device communicates with other surrounding devices through Zigbee, a high-level communication protocol that is used to create personal area networks with small, low-power digital radios. There is no need to connect to the internet. Each device can connect to similar devices in neighboring vehicles through Zigbee devices, thus sharing data. The personal data of the drivers and their plate numbers remains secure as only the location and driving behavior is shared.