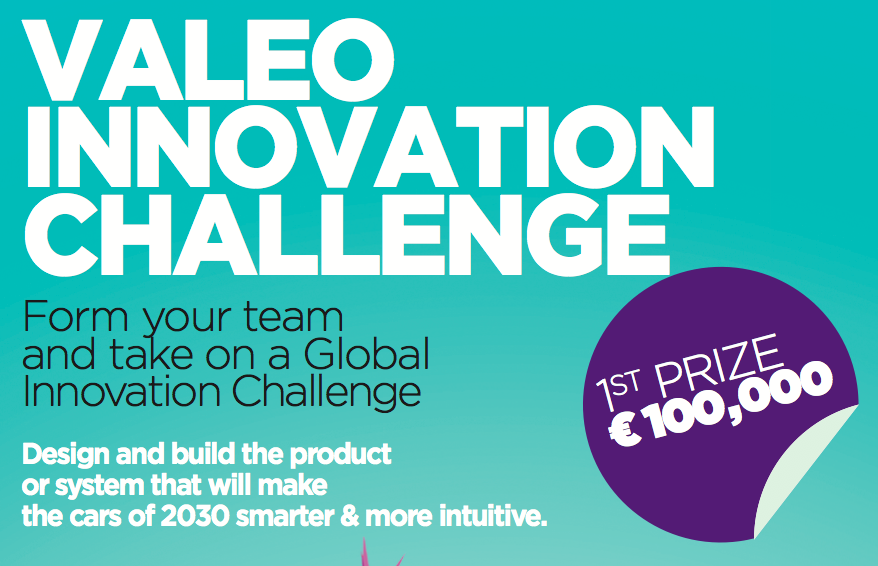 Students with a flair for innovation have a chance to make it big through the 2017 edition of the Valeo Innovation Challenge. Winners have a shot at big prizes including 100, 000 Euros and an all expenses paid trip to Paris. The second prize winner takes home 10,000 Euros. For the first time ever, the winning team in the “technical innovation” category will also have a chance to make their dreams come true by joining a Valeo-partnered start-up accelerator to develop their project. Almost 5,000 students have signed up to participate in the challenge, thus setting a record in the fourth edition of the contest.

About 1,628 teams drawn from 80 nations and 748 universities have submitted their project outlines to participate in the contest in one of two categories – the application in one of the two available categories – “technological innovation” and “idea for new ways of using cars”. Participants include students from some of the most renowned universities in the world including MIT, British Columbia University, Berkley and HEC.

While 70 per cent of the entries are in the ‘technological innovation’ category, 30 percent are in the ‘idea for new ways of using cars’ category. This year round, participants are allowed to include a teacher as one of the members of their team and hence 162 teachers have registered to team up with their students.

The increasing interest in the contest every year highlights the immense interest students have in coming up with ideas that could possibly make cars cleaner, smarter, more fun to drive and more intuitive by 2030.

Seventy Valeo experts who are located across the company’s R& D facilities in different parts of the world as well as many independent scientists will carefully scrutinize each of the projects that are submitted to shortlist the 24 teams that will make it to the next round of the contest. The finalists will be announced on March 24, 2017, and each team will get 5,000 Euros from Valeo to develop their idea further by making a functional prototype, application or other solution. They will be allowed more time till July 13 to develop their project further and then eight finalist teams will be announced on September 13. The winners of the contest will be announced on October 27.