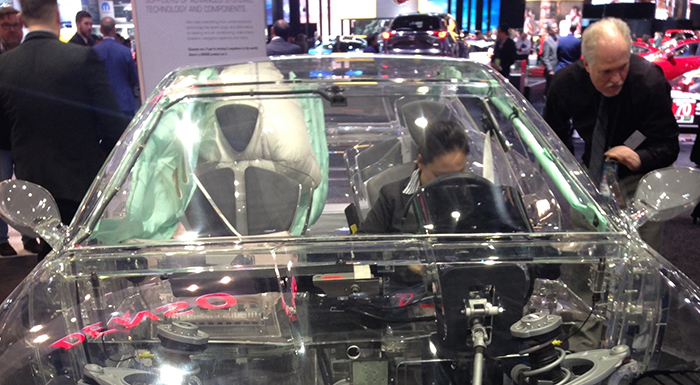 ZF Friedrichshafen is using the 2016 Detroit Auto Show as a platform to make it clear just what it supplies to the automotive industry.

The show floor displays a full-size acrylic model of car that comes complete with a steering wheel, seats, belt buckle and doors that open and close so both the industry and car buyers can see what it does.

According to John Wilkerson, senior communications manager for ZF’s ZF TRW safety technology operations in Livonia, Michigan, it is really a great opportunity to show people where the things they make sit in the car.

TRW initially unveiled an acrylic vehicle mockup of its products at the 2007 Frankfurt Auto Show, but according to Wilkerson, that display was stationary. The one presented at the COBO Center enables visitors to open the door, take an acrylic seat, and touch and feel its parts.

The instrument panel comes with a heads-up display (HUD) and a touch-sensitive pad to navigate through an integrated infotainment system as well as a state-of-the-art steering wheel that can spot when drivers take their hands off the wheel – part of an anticipated autonomous driving future.

Found beneath the acrylic hood are the axles, transmission, steering systems, and advanced cameras and radars.

“We can tell people about it, but here’s something where you can see it and actually get into it,” Wilkerson concluded.