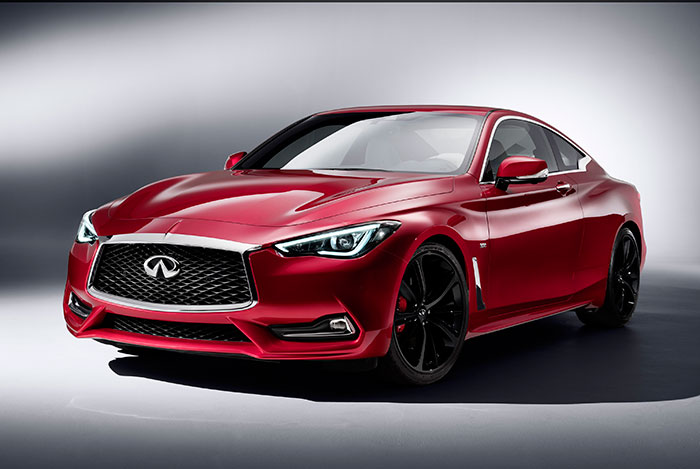 Infiniti is using the Detroit Motor Show for the global debut of the Q60 sports coupe. The Q60 made a strong impact on visitors to the ongoing 2016 edition of the show with its striking design and outstanding performance.

The Q60 stays true to the distinctive design and muscular elegance of the Q60 concept which was unveiled at the 2015 NAIAS. Speaking about the Q60, Carlos Ghosn, CEO of Nissan Motor Corporation and the Renault-Nissan Alliance said that as the third-generation version of Infiniti’s iconic sports coupe, the new Q60 will help Infiniti to build on its reputation for technology leadership and take Infiniti’s brand heritage to greater heights with its driver-oriented design, elegance and performance.

The driver dynamics have been ramped up with innovative drivetrain technologies. Powered by the high performance 3.0-liter V6 twin-turbo engine belonging to the new and exclusive ‘VR’ powertrain family, the Q60 continues the brand’s longstanding heritage of six-cylinder powertrains production. The new V6 engine is available in two versions – 300hp or 400hp, with the 400 hp engine offering one of the best power-to-efficiency ratios in the sports coupe class.

The Q60 rates high when it comes to driver engagement with its combination of flexible handling and ride comfort. These have been further enhanced with the new optional Dynamic Digital Suspension, to make the ride more comfortable and provide smoother handling.

Other notable features of the Q60 are Infiniti’s second-generation Direct Adaptive Steering for better steering feel and feedback, and the Drive Mode Selector that allows motorists to personalize the steering’s precise responses based on their preferences.

Roland Krueger, President of Infiniti Motor Company, added: “The Infiniti Q60 conveys a powerful elegance through its daring design, next-generation ride and handling technologies, and powertrains offering up to 400hp. The Q60 will attract new customers to the Infiniti brand and affirm our position in the sports coupe segment.”

The global launch of the new Q60 sports coupe marks a time of rapid growth for Infiniti, and is part of a bevy of new product launches. Infiniti experienced record growth in 2015 with sales of 215,250 new vehicles, a year-on-year rise of 16%.