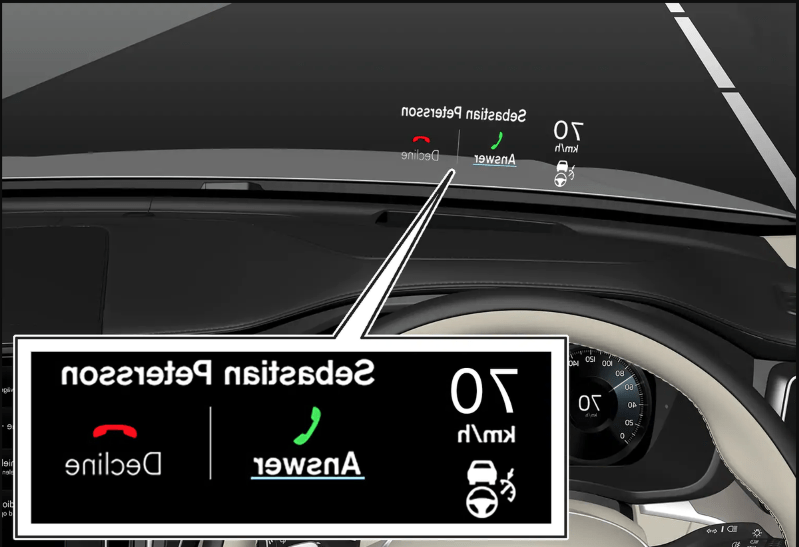 Volvo Files Patent for Head-Up Display on the Roof

Volvo has literally taken head-up displays to the roof with a recent patent application that it filed with the U.S. Patent and Trademark Office. The patent indicates that the company is working on a head-up display that is located on the roof of the car.

The company filed the patent on August 13, 2019. Like most HUD systems, this one also would use a series of mirrors which would work with a projector to display an image in front of the driver on the windshield.

According to the illustrations filed along with the patent application, the projector system would be located
right above the driver. It would display the information needed about the car on what Volvo calls an “optically transmissive roof window.” Volvo is likely to modify the glass used for this “roof window” for better projection in all light conditions. This could possibly involve the use of an auto-dimming glass or variable-opacity electrochromic glass for better visibility of the image in all conditions. When it comes to the projection system involved, according to Volvo, it is likely to be LED based, with options for brightness and customization of its position based on the preferences of the driver.

In view of the fact that it is not easy or safe to crane your head upwards to view a head-up display, the information that is likely to be displayed is probably stud that is not too essentially.

Volvo said it developed the technology mainly to help avoid the clutter caused by the multitude of front display systems and to reduce the number of pages that need to navigated to uncover certain information. With technology and vehicles becoming more complex, drivers now have access to more data than ever, but the space that is available for the display of this data still continues to be the same.

One notable feature of this system is that it is possible to check on the vehicle’s status without having to exit from the vehicle or enter it. Even when you are at home, you can use the system to look down at the roof of the vehicle from a higher vantage point and learn if the vehicle is locked or, get more information about its charge status or the battery life, if the vehicle is electric.

The technology could also be useful in the case of autonomous vehicles. Drivers who want to relax and let the car take over the wheel could look up at the roof for information about their speed, distance, and time of arrival.