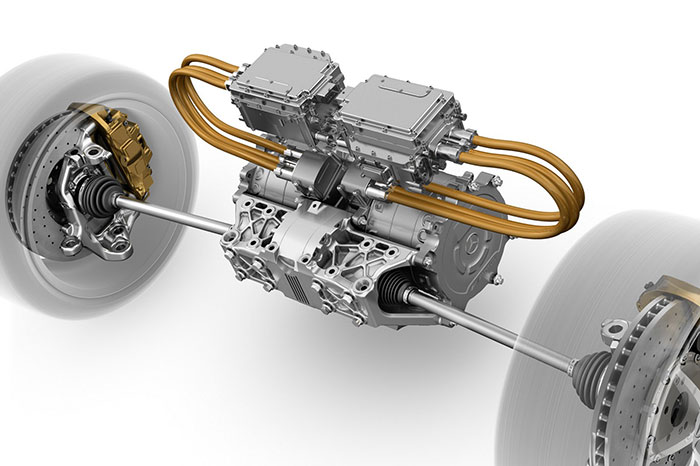 The design of large urban and off-road vehicles such as SUVs and MUVs presents engineers and urban planners with challenges spanning from improving overall vehicular efficiency to the safety of large vehicles on increasingly congested urban roads. Electric torque vectoring has gained ground as an emerging and novel technology as a plug-in module for hybrid and all-wheel drive vehicle.

At its core, torque vectoring is one of the most critical components of a drive system that keeps an SUV on the road in challenging terrain. Consider the example of driving on sand dunes; the shifting and undulating sands can play havoc with a car that simultaneously transmits equal torque to all its wheels. Torque vectoring combats yaw—the side-to-side movement along the vertical axis of the vehicle—and distributes torque to the wheels that need it more than the others in order to maintain the overall stability and fuel efficiency of the vehicle. Variable torque technologies have slowly gained ground and crossing over from the world of competitive off-roading to SUVs. However, computer-controlled torque vectoring that applies calculated amounts of torque to a wheel while simultaneously engaging the brakes on another is a new frontier in electrical and electronic control systems.

The advent of independent differentials and Super Handling All-Wheel-Drive (SH-AWD) systems has raised the bar for driver safety standards. This means that SUVs can now tackle far more challenging environments without compromising safety. Honda’s luxury brand, Acura already uses an SH-AWD system that switches from a standard 90/10 front-rear torque ratio to a 50/50 ratio during hard cornering maneuvers. A host of technologies such as Volvo’s eAxle and advanced driveline technology uses a 60-kW, 240-Nm motor in tandem with the electric axle in an exceptionally high 1:10 ratio generating a phenomenal 1,770 lb-ft of torque for the rear wheels. The technology, developed by GKN Driveline, is currently being tested on the Volvo XC90 and is expected to pervade the automotive market by 2025. German automakers BMW and Audi are not far behind in working with ZF TRW to install cross-axle electronic torque vectoring that delivers torque to any one of the four wheels independently. ZF TRW has its own customized solution named Vector Drive that is compatible with all-wheel drive and even rear-wheel drive cars. Vector Drive also features independently distributed differential torque that helps a car turn safely and smoothly into its curve even during hard cornering.

Electric torque vectoring is expected to function alongside other stability control technologies such as roll prevention, traction control, braking systems, and electronic braking.