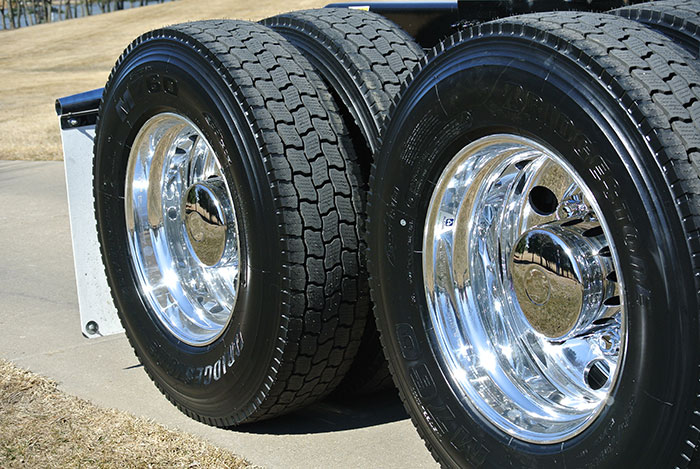 At an average weight of 35 kilograms, the average steel heavy-duty truck wheel adds between 245 to 385 kilograms of weight to a 6-wheel or 10-wheel unladen truck in addition to the weight of 54-kilogram tires. Therefore, weight reduction at a component level becomes crucial in the interest of increasing fuel efficiency. Aluminum industry leader Alcoa has pioneered an innovative range of heavy-duty truck tires that weigh nearly half as much as standard steel truck rims. In effect, the use of the new Ultra One rims reduces the overall weight of a heavy-duty truck and trailer by about 635 kilograms.

Alcoa’s expertise in innovative forging and manufacturing of lightweight metals has enabled the production of ultra-light wheels made of its trademarked MagnaForce alloy. These new rims are currently being explored as a viable option by several large fleets, according to Tim Myers, the President of Alcoa Wheel and Transportation Products for commercial and industrial markets. The emergence of stringent industry-level legislative regulations governing the control of toxic chemical pollution by trucks has resulted in fleets switching to pollution control systems. The added weight of these catalytic and non-catalytic systems has resulted in the need to reduce overall running weight in order to comply with governmental weight limitations on various truck classes around the world. Alcoa has also stated that the new Ultra One has been released in Europe in 2015 and is expected to be available in the United States, having received approval from an overwhelming majority of truck and trailer manufacturers.

Structurally, the Ultra One and all its variants are expected to run cooler, with improved thermal performance under stress. Alcoa’s new alloy has been stated to be six times stronger than steel and 17 percent stronger than the company’s own alloy that is also an industry benchmark for automotive materials. Visually, Alcoa has also introduced its patented LvL ONE high-shine surface for these rims, making them easier to clean and resistant to corrosion.