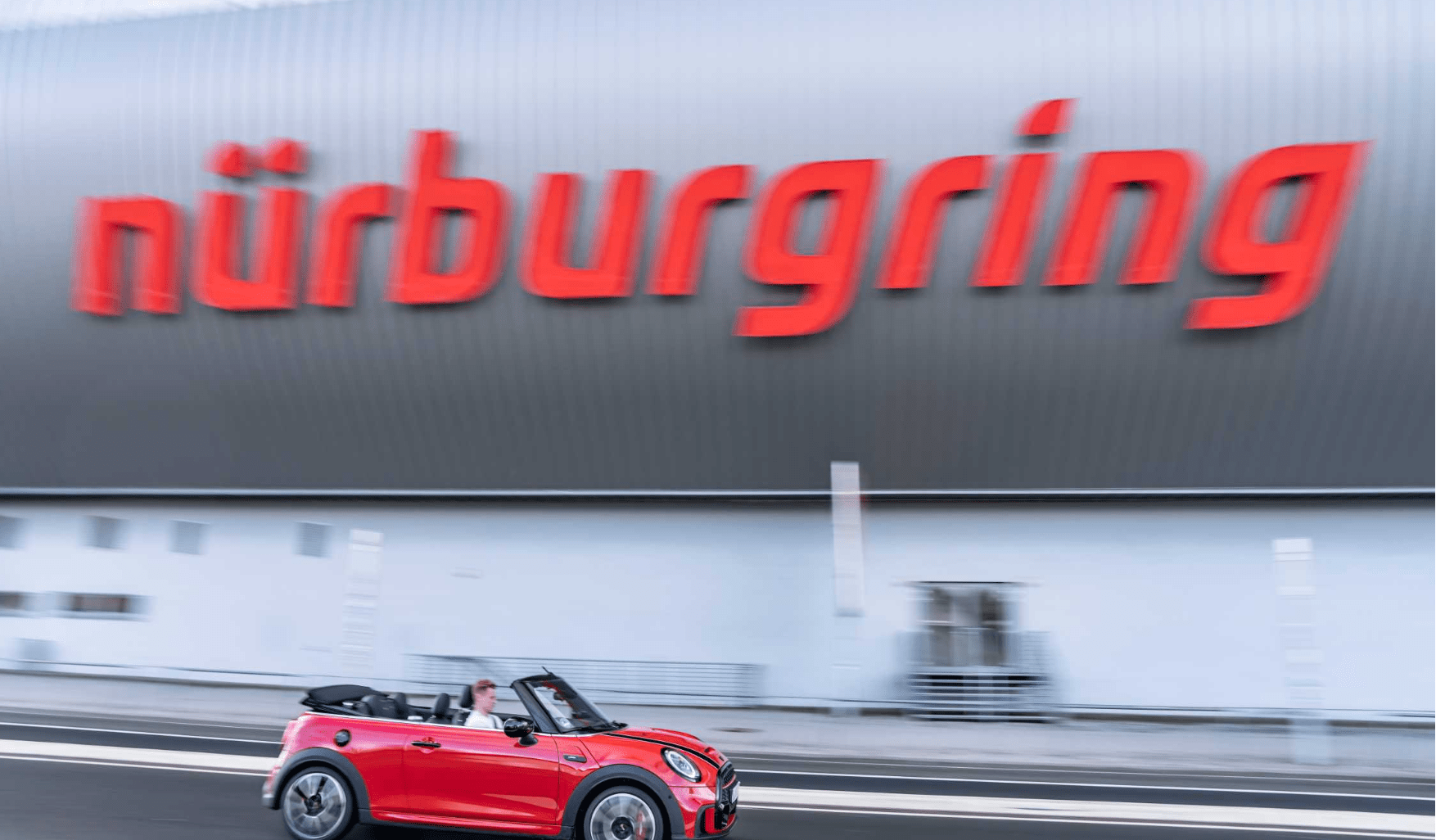 MINI John Cooper Works Convertible for 24 hours at the Nürburgring

It is a marathon for people and engines. Once a year, the top stars of touring car and Gran Turismo racing battle it out for victory at the 24-hour race on the Nürburgring. The atmosphere at the competition against and around the clock is reminiscent of the times when Formula 1 races were still held on the Nürburgring’s Nordschleife. As a real spectator magnet – and at least from next year onwards it will be again – the 24-hour race has already attracted up to 200,000 spectators to the grandstands as well as to the meadows and camping areas along the track in the Eifel. Motorsport fans and driving enthusiasts, however, are captivated by the “Ring” all year round. For them, the racing flair around the legendary Nordschleife and the adjacent Grand Prix circuit opened in 1984 is simply irresistible, as a 24-hour trip around the Nürburgring in the MINI John Cooper Works Convertible (fuel consumption combined: 7.4 – 7.1 l/100 km according to WLTP, 7.4 – 7.1 l/100 km according to NEDC; CO2 emissions combined: 167 – 161 g/km according to WLTP, 169 – 163 g/km according to NEDC) impressively proves.

Hatzenbach, Fuchsröhre, Adenauer Forst, Caracciola-Karussell, Hohe Acht, Döttinger Höhe: the names of the famous sections of the Nürburgring have a mystical ring. During the so-called tourist drives, hobby drivers can follow the tracks of the professionals and their racing cars in their private vehicles. But to feel the fascination of the Nürburgring, it is enough to be on the country roads in the surrounding area. Over more than 20 kilometres, the Nordschleife winds its way through the hilly and wooded landscape of the High Eifel. As a result, the tradition-steeped race track passes several villages, crosses public roads with bridges and subways, and can be seen from outside by looking over the fence in many places.

Three-time Formula 1 world champion Jackie Stewart once gave the Nürburgring-Nordschleife the name “Green Hell”. To this day, it is considered the most demanding race track in the world. The BMW Group’s test and development engineers use the varied course to put the finishing touches to the driving characteristics of new models. A vehicle that passes the endurance test on the Nordschleife can convince on any road in the world.

A piece of the Nordschleife is also in the MINI John Cooper Works Convertible. The developers call integrated application the fine-tuning on test tracks, country roads and, not least, on the race track that ensures that all drive and chassis systems work together perfectly. In the case of the MINI John Cooper Works Convertible, the test programme has resulted in the thrilling performance characteristics of its 2.0-litre, 170 kW/231 hp four-cylinder engine with MINI TwinPower Turbo technology being transformed into extreme driving pleasure. This is achieved with both the standard 6-speed manual transmission and the optional 8-speed Steptronic Sport transmission and with the model-specific sports suspension as well as with the latest generation of the Adaptive Suspension, which now features frequency-selective shock absorbers to ensure sporty handling and long-distance ride comfort.

The model-specific steering, the sports brake system with four-piston fixed caliper brakes on the front wheels developed in cooperation with the specialist manufacturer Brembo and the 17-inch John Cooper Works light-alloy wheels are also fixed components of the standard overall package for fascinating performance. Added to this are the design features characteristic of John Cooper Works models, which ensure optimum aerodynamic balance even in highly dynamic driving situations. In the latest new edition of the MINI John Cooper Works Convertible, the detailed work done to optimise airflow is visible at first glance. Vertical air intakes in the front apron, which now has a particularly clear and purist design, direct the airflow specifically along the wheels to reduce turbulence. At the rear of the underbody, the airflow now meets a particularly distinctive diffuser in the rear apron.

On the country roads of the Eifel, the result of the precise fine-tuning can be felt over every kilometre. They, too, offer the mixture of tight bends and long curves, ascents and descents that make up the charm of the Nordschleife. In addition to untouched nature, historical monuments also invite you to stop off. These include, of course, Nürburg Castle, built in the 12th century, which helped give the “Ring” its name and which today sits on a hill in the middle of the Nordschleife. The most beautiful view of the ruins of the castle is in the village of the same name not far from the access road to the race track.

The “Ring” itself is also omnipresent on a day trip through the Eifel. Time and again, a section of the Nordschleife suddenly catches your eye as you drive between villages, meadows and forests. If you stop at the right place, you will immediately be within sight of the ideal line and can, for example, use the lunch break to watch tourist or professional test drives on the race track.

The tourist infrastructure of the High Eifel also includes numerous signposted cycling and hiking trails. In the very north-east of the “Ring Region”, not far from the Caracciola Carousel, the former steep section of the Nordschleife can be explored on foot or on two wheels. There, for example, all it takes is a short change from the MINI John Cooper Works Convertible to the MINI Folding Bike from the MINI Lifestyle Collection to realise that the section of track that was closed down decades ago does not bear its name without good reason.

Around the “Ring”, there is a choice of different types of accommodation at campsites and in holiday home settlements. They were created primarily for visitors to the motor sport events, the annual rock festival and numerous other events on the Nürburgring grounds. But they are also the ideal destination for a relaxed end to a day full of driving fun during a 24-hour excursion to the Nürburgring.