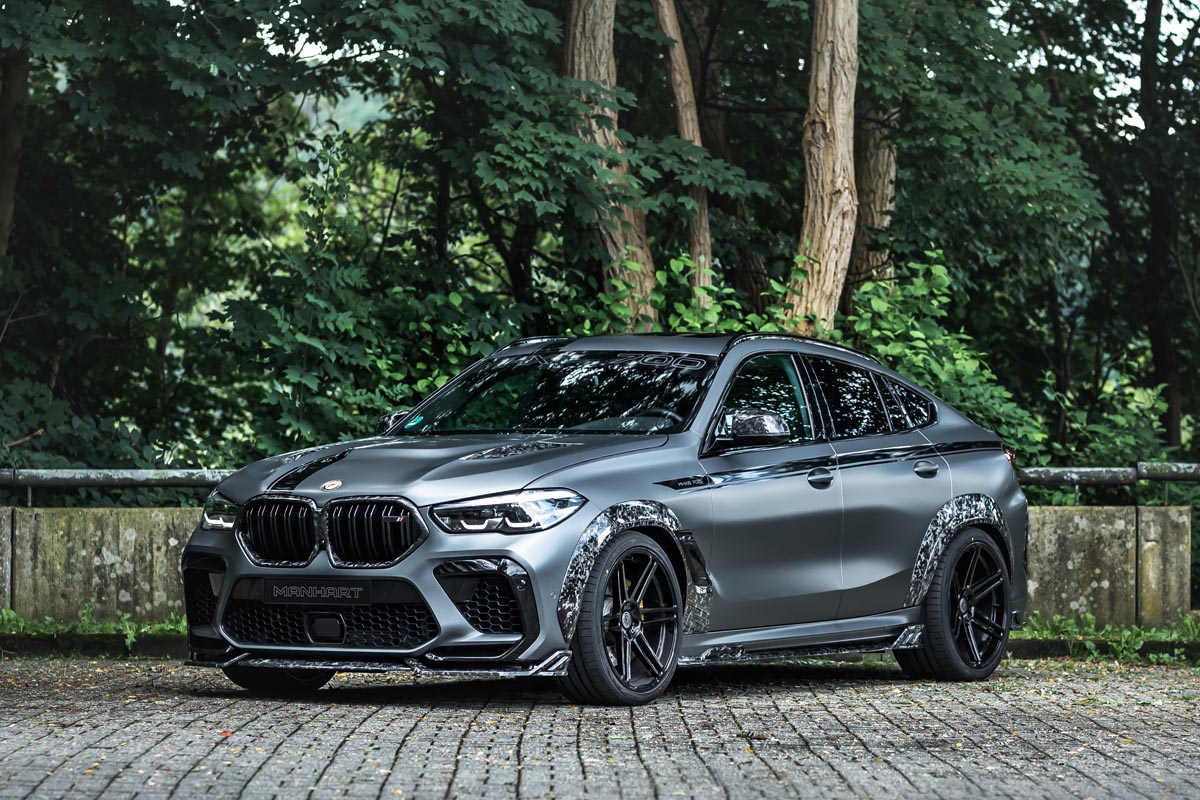 There is no doubt about it, the BMW X6 M Competition is already one of the most impressive
SUVs to be seen on German roads as standard: With a length of 4.94 metres, a width of 2.02
metres, a height of 1.69 metres and a combat weight of just under 2.4 tonnes, the 625 hp / 750 Nm
F96 belongs to the absolute top class of power SUV coupé. MANHART Performance from
Wuppertal have however sent the X6 M Competition to the gym again, where it visibly and
noticeably trained its muscles.
The even broader shoulders and taut muscles with which the heavyweight athlete, henceforth
known as the MANHART MHX6 700 WB, are unmistakable: WB in this case stands for widebody
and announces a 24-piece widebody body kit made of artistic forged carbon, with a fibre structure
whose irregularity is almost reminiscent of polished marble or granite. This includes a front spoiler,
radiator grille, two-part rear spoiler, rear diffuser, side skirts, multi-part wing extensions, exterior
mirror housings and other Forged Carbon parts. In addition, MANHART Performance combined a
bonnet, also made of Forged Carbon on the MHX6 700 WB project car, which displays its fibre
structure on clear-coated air vents. And to stay with the “carbon”: The rest of the body is wrapped
in a “Matte Charcoal Metallic” full wrap with gloss black contrasting MANHART decals.
To match, MANHART Concave One, double-spoke forged wheels in satin black rotate in the
voluminous widebody wheel arches. Installed in XXL dimensions of 10.5×22 at the front and even
11.5×22 inches at the rear, the MANHART rims wear high-performance tyres in dimensions
295/30R22 and 315/30R22. MANHART’s engineers have reduced the X6 M’s high ground
clearance by around 30 millimetres by means of an in-house suspension optimisation, the central
components of which are lowering springs by H&R. The X6 M’s muscular appearance is of course
also enhanced by the MANHART suspension.
The muscular appearance of the MHX6 700 WB is no empty promise! Parallel to the bodybuilding,
MANHART Performance have increased the power of the 4.4-litre biturbo V8 engine from the
factory’s 625 hp and 750 Nm, to 730 hp and 900 Nm. For this purpose, either an MHtronik auxiliary
control unit is used, or an ECU remapping is carried out. The prospective MHX6 700 WB customer
is also spoilt for choice as to whether he wants the four 100-millimetre tailpipes of the MANHART
stainless steel exhaust system with flap function with ceramic-coat or carbon-coat. Optional
(without TÜV, for export only) are MANHART Race downpipes without catalytic converters as well
as OPF-Delete replacement pipes and OPF/GPF-Deleter.
The brake system remained standard on the vehicle pictured – with the exception of an individual
MANHART design for the multi-piston calipers; individually configurable upgrades can be made
here on request.
In keeping with the exterior styling, MANHART Performance also continued the extravagantly
exclusive Forged Carbon refinement in the passenger compartment: here a twelve-piece Forged
Carbon interior kit sets shimmering accents. The irregular, short-fibre high-tech fabric adorns the
dashboard, centre console and door panels as well as the spokes and gearshift paddles of the M
sports steering wheel. Forged Carbon is also used on a large scale on the two-piece backrest
shells and the console trim of the sports seats.
Visit the MANHART stand at the upcoming IAA Mobility 2021 in Munich, where MANHART will
present the MHX6 700 WB together with the equally brand new MH5 GTR limited 01/01 and the
MH4 GTR! You will find MANHART Performance between September 7th and 12th in hall B4 at
booth A60.