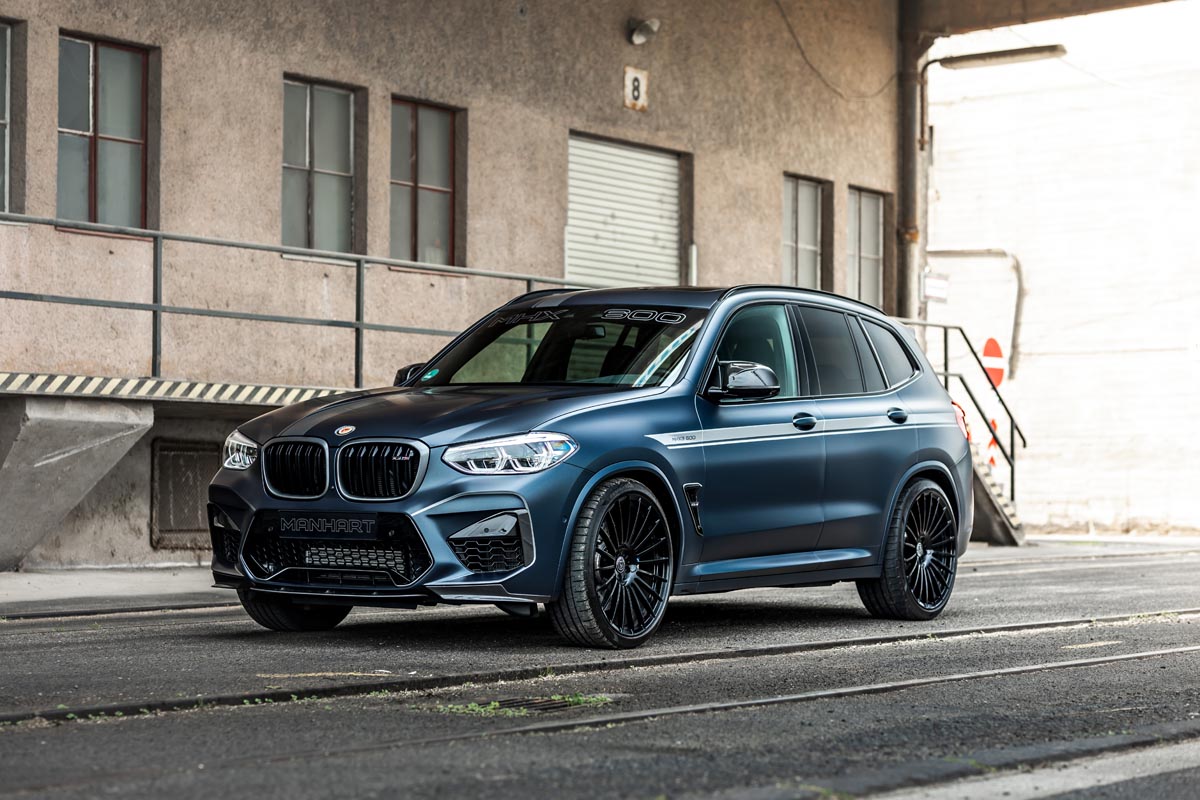 If you want to buy a powerful mid-size SUV, you currently have two main options to
choose from. These are either a classic SUV or one with a coupé roof. While Mercedes
launched the AMG GLC 63 (S) back in 2017, BMW followed suit with the X3/X4 M a good
two years later, in the summer of 2019. Depending on the variant, both competitors
produce up to 510hp and at least 600Nm of torque. What these powerful all-wheel-drive
vehicles also have in common is that they have become the focus of MANHART
Performance. Based on the Munich model, the tuning specialists from Wuppertal are now
rolling out an exclusive, strictly limited version of their MHX3 600 interpretation.
The MANHART MHX3 600 LIMITED 01/10 is, of course, based on the powerful,
Competition version of the X3 M, which delivers 510 hp and 650 Nm in its standard form.
MANHART uses this output of the three-litre in-line six-cylinder, with biturbo charging as a
good basis for higher things. The power is, as already indicated by the new model
designation, noticeably increased again, resulting in a whopping 635hp and 785Nm
maximum torque. This is possible thanks to the performance upgrade by means of an
MHtronik auxiliary control unit. Added to this is a complete stainless steel exhaust system
with valve control, which flows into four carbon-tailpipes. MANHART also offers
downpipes with 300-cell catalytic converters, which, however, do not have TÜV approval
and are only suitable for export, just like the OPF-Delete replacement pipes with 200-cell
HJS catalytic converters.
Visually, the MHX3 600 LIMITED 01/10 also stands out from the crowd. For one thing, the
MANHART suspension upgrade with H&R springs lowers the car by 30 millimetres.
Furthermore, MANHART alloy wheels by ALPINA, in the dimensions 9×22 and 10×22
inches are fitted in the wheel housings. They are fitted with 255/35ZR22 and 295/30ZR22
tyres. Further highlights are provided by the extensive MANHART carbon body kit, which
includes a splitter, side flaps and skirt inserts for the front, mirror caps and a rear diffuser.
The steering wheel clasp also shimmers in carbon. Last but not least, the striking full body
foiling in Matt Dark Blue causes quite a stir. This is all the more true as, as is customary
with MANHART, this base is of course topped with a decorative set of trim strips and
lettering, in this case in grey.
Of course, the entire tuning package – as described here – is also available for the SUV
coupé brother X4 M Competition (F98).