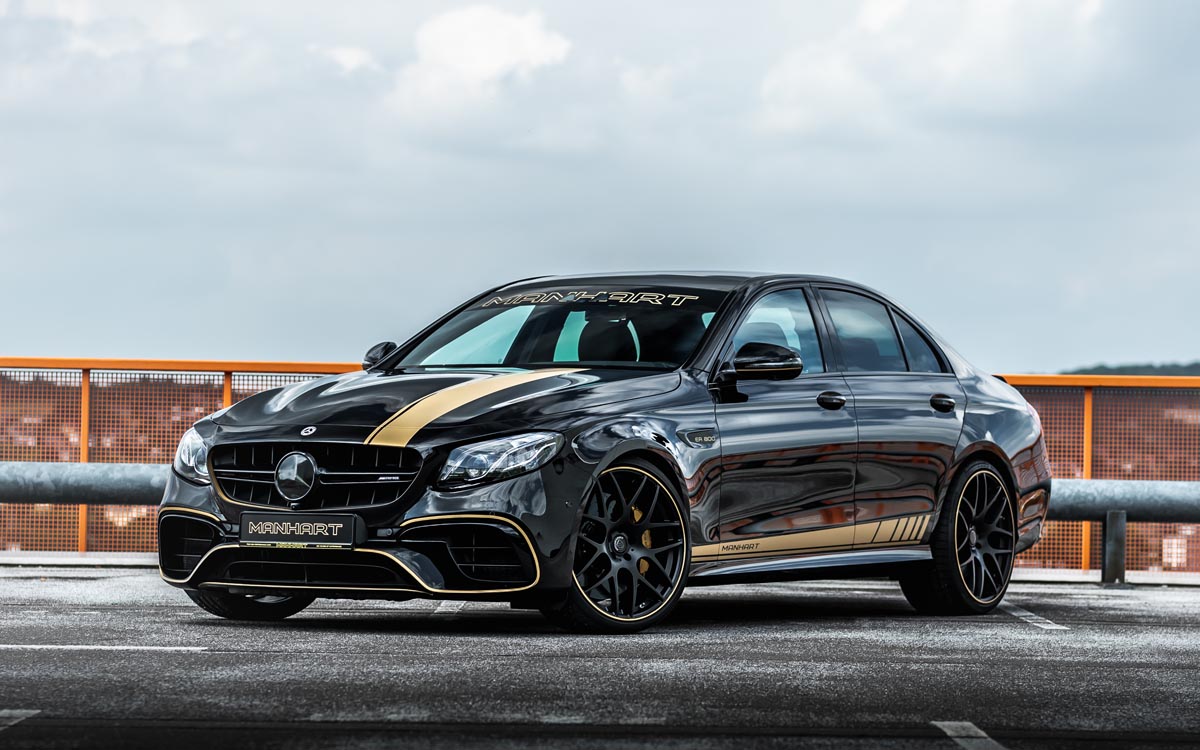 When thinking of the specialists from MANHART Performance, most tuning fans probably think first of refined BMW models. Consequently, when many petrolheads think of an optimized, highperformance saloon in the luxury class from this company, they naturally assume that the basis is an M5. But the team from Wuppertal can also do things differently! And so it has now unveiled its MANHART ER 800.
The basis for this top sports car, limited to five units,is the M5 competitor from Affalterbach,the Mercedes-AMG E 63 and E 63S, respectively.
The AMG version of the E-Class already produces 571hp, (E 63) or 612hp (E 63 S) in standard
condition. This output, which is by no means weak, is not only a good starting point for MANHART
on the way to significantly more power: as the new vehicle designation already indicates, the
AMG’s four-litre, biturbo V8 receives a whopping power increase, boosting to an impressive 809hp
and 1,070Nm of maximum torque. This is achieved by a MANHART turbo upgrade, a MANHART
intercooler as well as a MANHART carbon intake and MANHART ECU remapping. To upgrade the
exhaust system, there are also supplementary MANHART sports downpipes with 300-cell catalytic
converters, which do not have TÜV approval and are therefore only intended for export.
To ensure that the ER 800 not only accelerates much more rapidly than the basic E 63 S, but also
comes to a stop again even more quickly, MANHART have installed a ceramic brake kit with
405x38mm diameter discs on the front axle of the ER 800. With regards to lowering the factory air
suspension by 20 to 30 millimeters, there are two different variants to choose from: either, as in the
case of the example shown, by using new coupling rods or via a software adjustment.
MANHART is also improving the appearance as usual: In the wheel housings sit in-house Classic
Line rims in the dimensions 9×21 and 10.5×21 inches with tyres in 255/30 ZR21 and 295/25 ZR21.
On the vehicle shown, they have a typical MANHART finish in side matt black with golden
decoration in the form of a decorative stripe on the rim edge. Alternatively, however, other
individual colour configurations are also possible on request. To round things off, the ER 800
wears a black radiator grille and – as is also customary with MANHART creations – a golden set of
decorations with decorative stripes and lettering on the black-painted body.