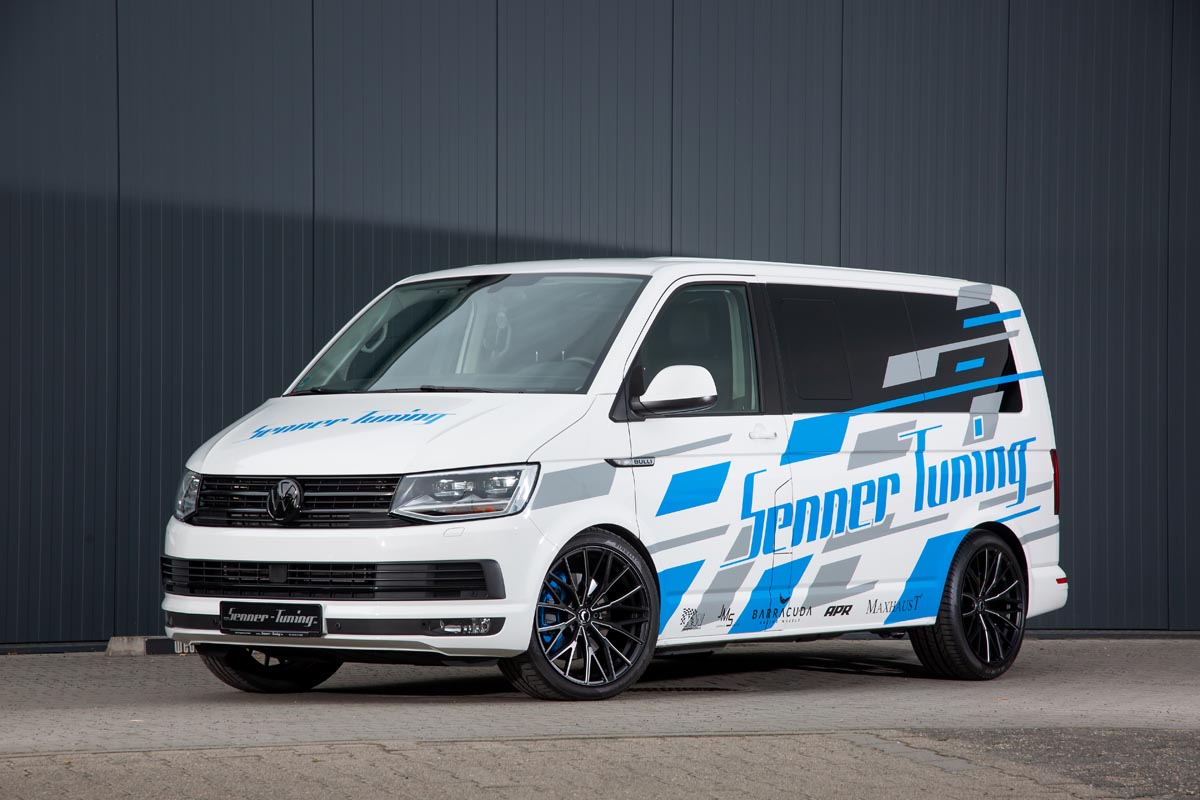 The experts at Senner Tuning in Ingelheim have over three decades of tuning experience, with
almost as much experience working with the “Godfather” of all vans – the VW Bus.
The latest result of Senner Tuning’s “Vanforming” is the T6 Multivan Bus shown here, which has
been comprehensively customized and optimized both aesthetically and technically. For example,
Senner Tuning replaced the standard suspension of the bus with KW DDC plug & play coilover
suspension, which allows the driver to choose from various settings – such as Comfort, Normal
and Sport – at the touch of a button. And to reduce the pronounced sideways tilt and tendency of
the bus to understeer, which are caused by the vehicle’s high center of gravity, sport stabilizers
were also installed on both axles.
The Project 3.0 light alloy wheels from the Ultralight Series by Barracuda Racing Wheels not only
greatly improve the look, but also the driving dynamics. These weight-optimized flow formed rims
measuring 10.0×20” weigh in at just 12.5 kg each and yet can handle loads of up to 875 kg, which
translates into a saving of around 100 lb of unsprung and rotating mass compared with
conventional cast rims of the same size. The result is noticeably more agility as well as improved
longitudinal and transverse dynamics. On top of that, the filigree rims with their pronounced
concavity of around eight centimeters and their highly technical finish in black milled with milled
spoke contours magically attract the eye. To finish, they have been fitted with 275/35R20 tires.
Senner Tuning increased the power of the 2.0-liter TDI four-cylinder engine from 150 hp and
340 Nm to 197 hp and 445 Nm. In addition to tweaks to the electronics, this power upgrade also
included installation of a sports air filter.
And to give the diesel engine a satisfying sound along with powerful propulsion, a Maxhaust Active
Sound System was also installed, which can be configured according to personal taste via a
smartphone app.
At first glance, it is obvious that the T6 Multivan is a Senner Tuning project vehicle, with large
swathes of designer wrapping in their signature blue covering the candy-white paint. As a fitting
complement to the white/blue/black color scheme, the VW emblems on the front and rear were
also painted black, along with all chrome parts on the exterior. The load sill protector is also black,
while the thermal insulation glazing was given additional tinting. The brake calipers, on the other
hand, glow blue behind the black rims. VW Bus connoisseurs, in particular, will love the “Bulli” door
emblems. And to cap it all off, even the Recaro Monza Nova child seat sports a matching color
combination.