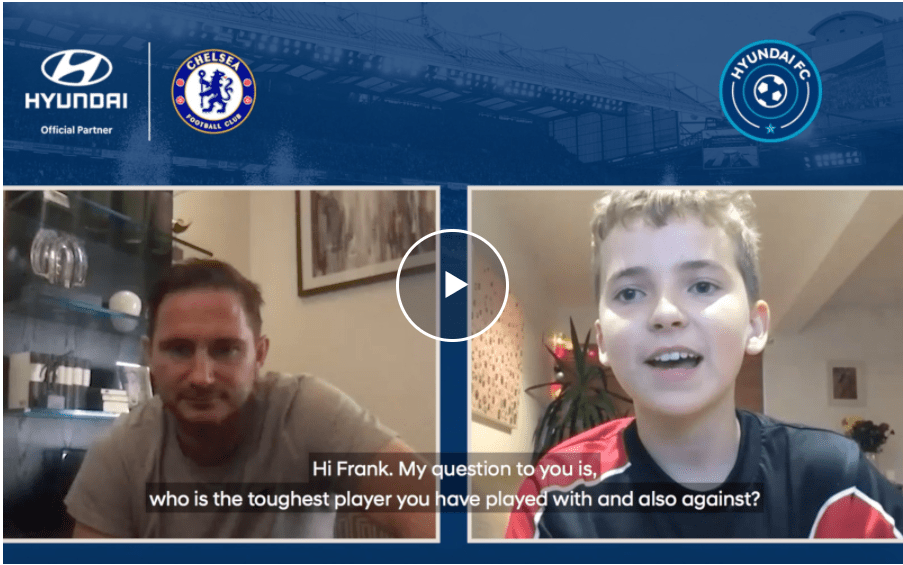 Building off the back of the inaugural Hyundai FC programme, Hyundai, Chelsea FC’s official automotive partner, launched the second season of the programme with an exclusive Frank Lampard virtual Q&A. Having worked with over 250 grassroots players last season, Hyundai FC 2020-21 will support 11 new junior boys and girls football clubs across the country, from Cornwall to County Down (NI). This virtual Q&A, hosted by Sky Sports presenter Laura Woods, introduced all the kids and coaches to the second season of the programme and some lucky players had the chance to put a question to the Blues’ manager.

Throughout the session Lampard answered a full range of questions from a host of excited kids on this year’s programme. Questions included: ‘Messi or Ronaldo?’, to which he replied ‘I’m going to have to go with Messi on pure natural talent’ and after being asked to name his dream seven-aside team, Lampard listed the likes of Neuer, Gerrard, Zidane and Ronaldinho.

Ashley Andrew, Managing Director of Hyundai UK said: “At Hyundai we are committed to supporting fans at all levels of the game – from the grassroots players, coaches and parents at the eleven Hyundai FC clubs to the elite-level through the sponsorship of Chelsea FC. We’ve had incredible feedback from our Hyundai FC clubs involved in the launch of the second season of the programme and we look forward to offering them more valuable experiences as the season continues.”

Simon Taylor, Head of Chelsea FC Foundation said: “It is fantastic to kick-off season two of the inaugural Hyundai FC programme. Last year, the programme was a huge success with over 200 players, and the coaches offered exclusive training sessions to further the teams’ development. We are excited to start another season and look forward to our coaching visits at the Hyundai FC clubs in the coming months!”

Nathan from Hyundai FC team Carnoustie Panmure said: “I can’t believe how lucky I was to be chosen to represent Carnoustie Panmure in the Chelsea – Hyundai experience. I’m a Chelsea supporter, so it was amazing to get to ask Frank my question, especially as he has been such an iconic footballer.”

Following the launch, as part of the Hyundai FC programme every club will be visited by the Chelsea FC Foundation coaches to lead a training session specifically designed for each team. Subject to COVID-19 restrictions, sessions will take place during October half-term. Each team has also received a new set of bespoke Nike playing kit and can look forward to a host of exclusive footballing experiences as part of the programme.

Utilising the Chelsea FC partnership, Hyundai is constantly looking for new ways to put the fans first and support them with grassroots opportunities through Hyundai FC and exclusive content. Find out more at https://blog.hyundai.co.uk/experiences/football.

Full list of Hyundai FC Clubs for the 2020/21 season are as follows:

Hyundai will be supporting the launch of the second season of Hyundai FC by showcasing key highlights from the virtual Q&A with Frank Lampard on the world-famous Piccadilly Lights starting on Friday 30th October. Lexi-Micheala from Hyundai FC Club, Castle Colts, will be featuring in the content shown on the big screen, with Hyundai inviting Lexi and her family to attend her debut in person at Piccadilly Circus. Lexi-Micheala’s reaction will be filmed and posted on Hyundai and Chelsea social channels on Monday 2nd November, so stay tuned!