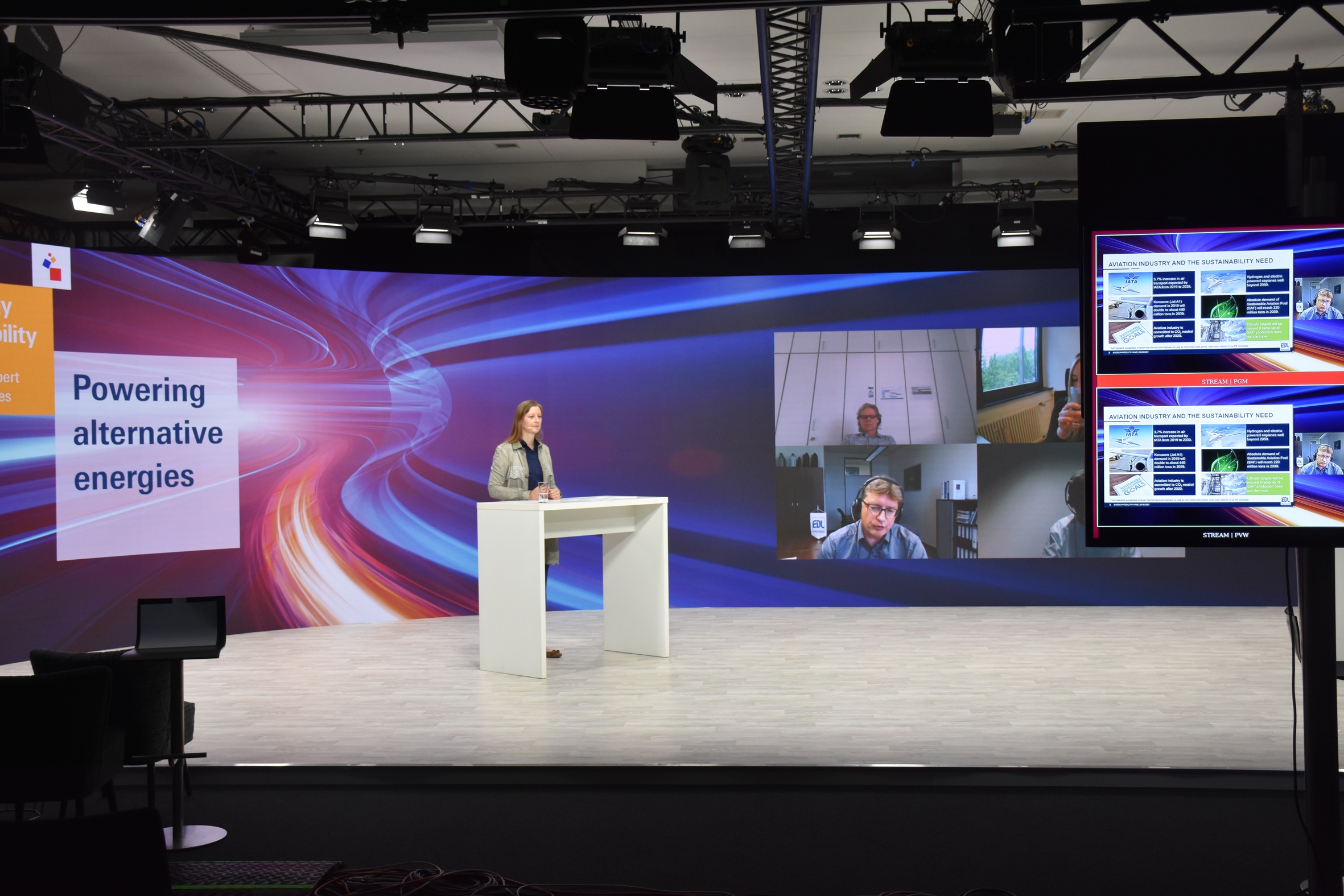 Game-changer or ‘rock star’ of the alternative
energy scene? Hydrogen is a topic that is occupying policymakers, industry and
researchers alike – reason enough for Messe Frankfurt to invite hydrogen experts
to take part in a digital panel discussion. On 24 June, representatives from various
companies and research institutes took advantage of this opportunity to discuss
whether hydrogen might be a game-changer for our future mobility. The experts
were in agreement that green hydrogen will play an important role in the mix of
alternative energies needed to make emission-free mobility possible and reach the
EU’s climate targets.
Michael Johannes, Vice President Mobility & Logistics at Messe Frankfurt, explained why
in a talk with the moderator, Silke Frank, who is also CEO of Mission Hydrogen: “We
launched this series of expert talks because without alternative energies, there will be no
mobility transition. That is why we want to provide a platform for this topic where key
stakeholders can share their views. We also want to raise the profile of this topic at
Automechanika and Hypermotion, two of our trade fairs that are taking place in Frankfurt
from 14 to 16 September 2021. I would already like to invite the community to join us on
the Frankfurt exhibition grounds for these events.”
Hydrogen that is created using renewable energy – green hydrogen – is growing
increasingly important as a climate-neutral fuel. That is because the latest research
identifies it as one of the most important solutions for achieving a CO2-neutral future.
Hydrogen has the potential to deliver huge reductions in CO2 emissions in a wide range
of applications, particularly in the field of mobility. That is one of the reasons why the Vice
President of the European Commission, Frans Timmermans, labelled hydrogen “the rock
star of the energy transition” last year.
During his presentation for the panel discussion, Prof. Thomas Willner, Director of the
Process Engineering Research Group at the Hamburg University of Applied Sciences
(HAW), estimated that we only have seven years remaining to restrict CO2 emissions if
we are going to succeed in our goal of limiting global warming to 1.5 °C. “Unfortunately,
we already know that it will be anywhere from five to 15 years before we are able to
achieve a net reduction in CO2 emissions with electromobility, because we must first
offset the increased emissions generated by battery manufacture. The only way we can
satisfy the ‘no delay’ criterion is with alternative fuels – regardless of whether they are
liquid or gaseous – and one of these fuels is hydrogen.” This was a view shared by Dr.
Thorsten Jänisch, a scientist working for the Institute of Combustion Technology at the
German Aerospace Center (DLR): “Due to their long development cycles, we probably
won’t see any substantial impact from fuel cells or electric flight until sometime after 2050.
We could see an impact from near-drop-in fuels by 2030, but we do not have much time
left and we need to act now. That is why we are so interested in drop-in fuels made from
biomass or green hydrogen – because they can be put to work now and immediately
reduce CO
2
emissions.”
Heinrich Klingenberg, Senior Hydrogen Expert at Hamburg Invest
Wirtschaftsförderungsgesellschaft mbH, reported on the Green Hydrogen Hub Hamburg
and the ‘ecosystem’ that is being created there in collaboration with various sectors,
including the steel and energy industries. “When you compare hydrogen with battery
technology, you can see that we are dealing with a ‘Swiss army knife’: that is because
hydrogen can be utilised in a wide range of applications. In addition, local production or
imports can provide a foundation for corresponding economies of scale and ensure
secure supply.”

Even so, here in Germany the hydrogen infrastructure needs to be developed, something
mentioned by various panellists. Kristoffer Lorentsson, Tendering Manager at MAN
Energy Solutions, was one of them: “The infrastructure in Europe is still limited. Today, the
only alternative is to directly take the liquid hydrogen from the production plant and
transport it to end customers with trailers. In Norway, the government has forced the
development of the hydrogen infrastructure, and I think they will have their first storage
stations for liquid hydrogen in less than three years.” Converting ships to hydrogen makes
it possible to come tantalisingly close to a ‘zero-emissions ship’. “LNG has made it
possible to significantly reduce sulphur and nitrogen oxide and nitrogen oxide emissions,
but with hydrogen we have the potential to also cut CO2 emissions with 100%. That is our
goal,” added Lorentsson. Michael Gensicke, Managing Director of Robert Bosch
Elektronik GmbH, also has ambitious plans – including for Hydrogen Campus Salzgitter,
where Bosch and other organisations (including the Fraunhofer Institute, MAN Energy
Solutions and Alstom) are represented: “My factory will succeed in reducing the CO2
footprint by some 40% within a single year. Naturally this is done not just with hydrogen,
but also by cleverly integrating other technologies involving hydrogen.”

Additional statements:
Thomas Korn, Managing Director, KEYOU
“We view the hydrogen engine as the key technology for rapidly implementing the
mobility transition. Scaling this technology is relatively straightforward, because large
quantities can be generated very quickly using existing production infrastructures. The
corresponding H2 infrastructure must be developed at the same time, because it is only
when there are a sufficient number of vehicles on the road that filling stations can do
enough business to make these investments worthwhile. One thing is clear: at the end of
the day, there has to be a valid business case for everyone involved, and both the
economic and ecological benefits must be evident.”
Elena Hof, NIP Programme Director, National Organisation Hydrogen and Fuel Cell
Technology (NOW GmbH)
“The diversity of the roles played by hydrogen in logistics systems can be illustrated quite
well using the example of a port. Hydrogen has many areas of application: generating a
ship’s electricity, driving the ship, and naturally importing hydrogen. That is why I do not
think it makes any sense to play off various applications against one another. Instead, we
need to start looking at the entire energy system as a whole, identify the linkages, and
determine how we can leverage synergies.”
Dr. Michael Haid, Managing Director, EDL Anlagenbau Gesellschaft, Pörner Group
“The aerospace industry is operating on the assumption that 80% of the aircraft currently
in operation today will still be in use in 2050. These planes are fuelled solely by kerosene.
Any attempt to significantly reduce CO2 emissions in the aerospace industry will therefore
need to make use of sustainable aviation fuels, because no more than a fraction of air
travel and transport will have been offset by electric or hydrogen drives by this time.”
Matthias Braun, Senior Advisor, Aramco Fuel Research Center
“The climate crisis can only be solved globally. Saudi Arabia recently signed an
agreement with Germany to cooperate in the push for green hydrogen. There is good
reason to hope that we can generate the tremendous volumes of energy we need in the
northern part of the world in the sun-drenched lands to the south, including Chile,
Australia, the Middle East and Africa.”