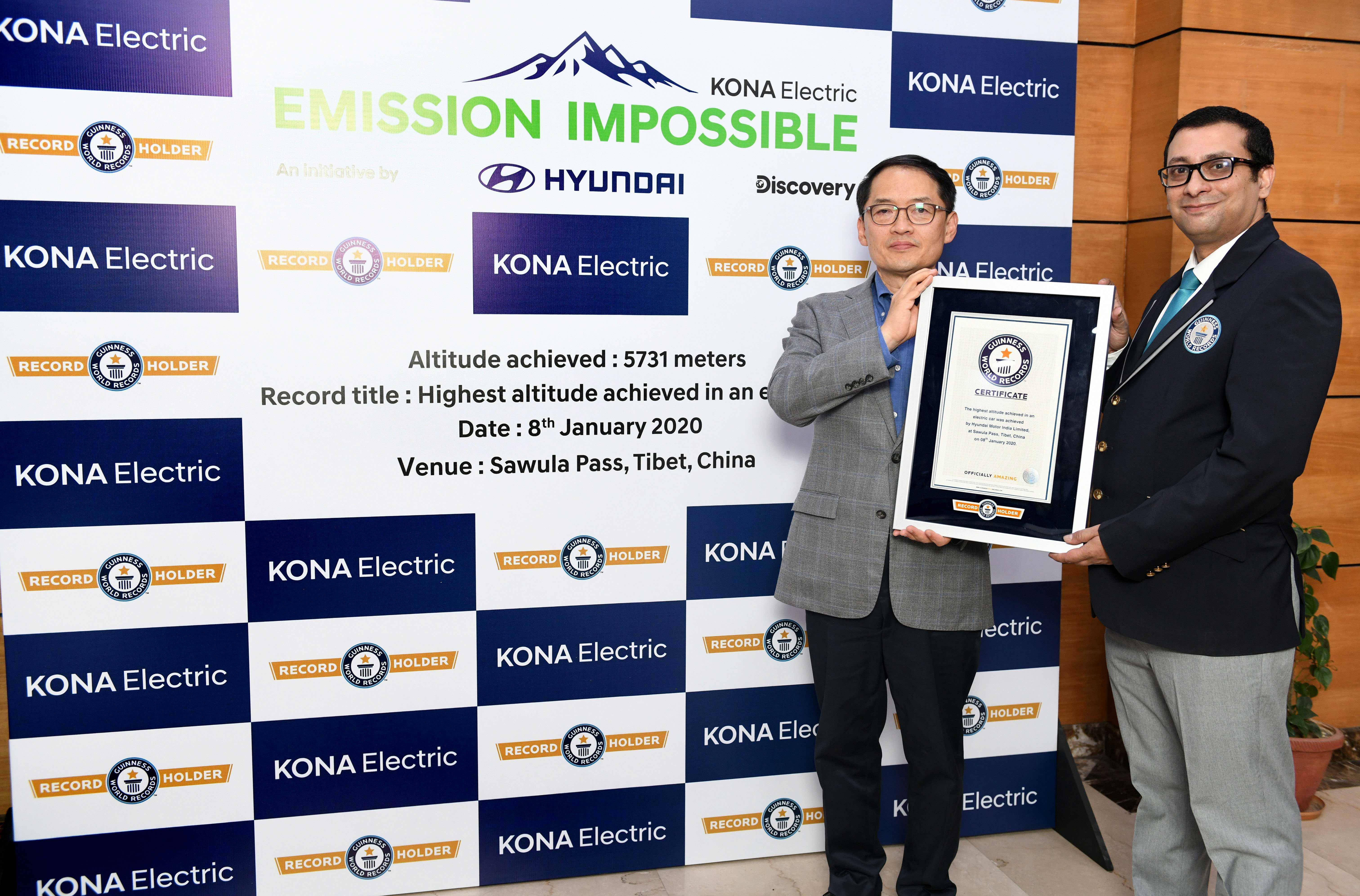 Hyundai KONA Electric has achieved a feat that would now be an entry in the prestigious Guinness Book of World Records. The car became the electric model to be driven at the highest altitude.

Hyundai KONA Electric is the first long-range Electric SUV to made fully in India, as part of the record attempt was driven to Sawula Pass in Tibet which is located at an altitude of 5,731 meters. It thus comfortably broke the previous record of 5,715.28 meters altitude achieved by an electric car.

Commenting on this feat, S S Kim, MD & CEO, Hyundai Motor India said that the Hyundai KONA Electric entering the renowned Guinness World Records marked a very proud moment for everyone and a remarkable feat for HMIL. KONA Electric has played an important role in bringing about the  Electric Revolution by demolishing many myths regarding electric vehicles. It represents Hyundai’s spirit of staying ahead of the curve. As part of the Emission Impossible Mission, KONA Electric lived up to its expectations by proving its mettle in the world’s toughest terrains without compromising its performance.

He added, “The KONA Electric is a Tech Icon and the new normal as it is the First Long Range Green SUV with 452 Kms/Charge (ARAI Certified) enhancing Indian customer confidence towards Electric mobility.”

Customers who buy a Kona Electric get two chargers along with the car to minimize the possibility of any range. They include a portable charger and an AC Wall Box Charger. In a few select cities like Delhi, Mumbai, Bengaluru and Chennai, Hyundai has deployed a Special KONA Electric fleet (KONA Electric to KONA Electric) comprising vehicles fitted with power converters to provide  emergency charging support to Kona customers. To further enhance customer convenience, all dealerships selling Hyundai KONA models are equipped with 7.2 kW AC Charger to support customers for KONA Electric Charging.

Rishi Nath, Adjudicator, GUINNESS WORLD RECORDS said that Hyundai has set a new precedent with the record for the highest altitude reached in an electric car. He went on to congratulate Hyundai Motor India for having achieved the record and thus setting a new benchmark in the annals of history.

By setting this record, Hyundai has proved that the KONA Electric is a truly reliable Electric Vehicle that can function well even in extreme conditions. During the course of the record attempt, the KONA Electric behaved in the manner of a true SUV when it came to tackling all kinds of difficulties like low temperatures, continuous snowfall and icy tarmacs. The vehicle demonstrated impressive stability and handling irrespective of road conditions thanks to the Electronic Stability Control (ESC).  The Hyundai Kona is a green vehicle with just the right combination of technology and performance that made the Guinness record possible.

During the entire duration of the drive, the KONA Electric was charged through the use of convenient portable chargers. Overnight, the car was charged using the standard portable charger that is provided along with the vehicle. There were no performance issues during the ascent. During the descent, the smart power regeneration system in the Kona further enhanced the driving range.

The conquest of the peak and the record showcased the KONA EV’s powerful performance and assurance of its range and capability to outperform in any weather condition across extreme geographies and demographics.