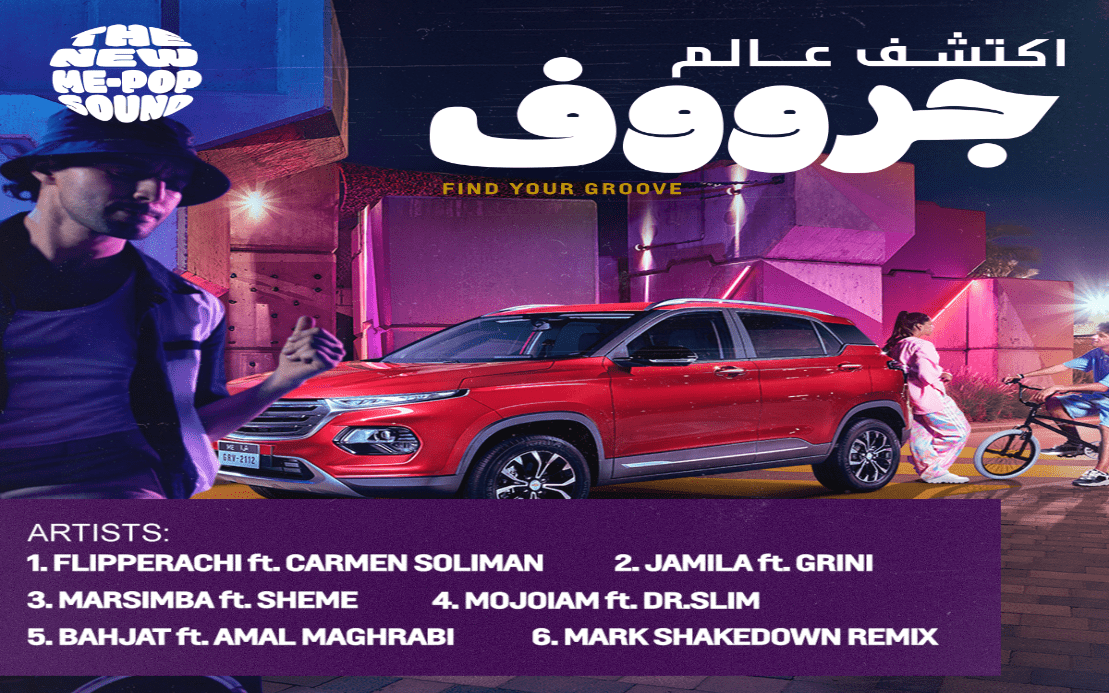 Every ride needs a suitable soundtrack to get your motor running, and memorable auto-companions like Chevrolet even share the spotlight in iconic tracks. Whether it’s driving that Chevy to the levee, down old country roads, with Snoop Dog or Taylor Swift, or towards a love that’s gonna last, music and Chevrolet have been going together like steering and suspension. Now, the American automaker, is revving up its music act in the Middle East.

Chevrolet Groove, the all-new compact SUV arriving in the region later this year, has chimed in to headline a new boost for the local music scene, creating a brand-new genre of music in collaboration with some of the region’s hottest talent. Bringing together 12 eclectic and wholly original artists from across the Arab world, Chevrolet Groove is launching an album of its signature ME-Pop sound, titled Find Your Groove, coming soon to your favorite music streaming platforms.

SUVs often offer drivers tech features or an affordable price, but the Chevrolet Groove bucks the trend, with segment-leading features from the base trim up. This unusual combination served as the inspiration behind the album which challenged musicians with their own unique groove to collaborate and create something never-heard-before.

Big Hass, Radio Host and Music Blogger said, “The regional music scene is always developing, but this is the first time we’ve brought together such high-profile talented artists and challenged them to collaborate and create a whole new genre of music. When Chevy came to us with the idea, we were excited by the opportunity to create something fresh to take the region’s sound to next level and we believe the best to do so is collaboration.”

“The Groove is a young, fun, exciting SUV, bringing a new dynamic to the region with its tech-savvy offering and affordable price tag. As Groove carves out its own unique place in the motoring mix, we were delighted to work with these talented musicians to create an album as unique as the inspiration. Chevy has always been part of pop culture, starring in movies and music, but now we take an active step forward in helping to shape pop culture in real time with the launch of the soon-to-be-stuck-in-your-head ME-Pop album. We can’t wait to show you more!” said Sharon Nishi, Chief Marketing Officer, General Motors Middle East & Africa.

The album, consisting of six vibrant tracks, brings together established and up-and-coming talent, from pop artists to grunge and rappers, to reinvent the sound of the Middle East. Track 1 is available now, followed by the rest of the singles dropping throughout November, with the full album available in early December so keep an eye (and ear!) out.

Bahraini hip-hop artist Flipperachi meets Egyptian singer Carmen Soliman’s dulcet tone in this firecracker of a song. Catchy and full of life, Flipperachi switches seamlessly between clever Arabic and English lyrics, while Carmen hits every note. From the first beat, you’ll want to get up and shake your groove thing.

Produced by none other than DJ Outlaw, the Bahraini-born producer who played an instrumental role in establishing the Khaleeji hip-hop scene, this mash-up is now live.

You’d recognize Moroccan pop princess superstar Jamila El Badaoui’s voice from the very first note and in track 2, she will create a stunning mash-up with fellow-countryman and power-ballad-belter, Grini.

The leading Arabic Afrobeat duo on the local music scene, Seedo Simba and Mazmars bring their trademark upbeat vibes and cheery tunes to Track 3, mixed with the soft ballads of one of Saudi’s most successful artists of the digital age, Sheme.

Fresh and fierce pop sensation from Saudi, Mojo, meets lyrical rap wizard Dr Slim in Track 4. An exciting blend of rap and pop blend seamlessly to create something you can dance and sing to.

Libyan Bahjat brings his indie twist to pop to collaborate with Amal Al Maghrabi, who won the hearts of millions of Saudis on Ya Ein.

Time for one more encore? Mark Shakedown, chart-topping DJ and music producer will remix Track 1 to give it his distinct musical flair to close the album.

Listen to the first track from the Find Your Groove ME-Pop album on all music streaming platforms and find out more about the Groove itself on Chevrolet Arabia.