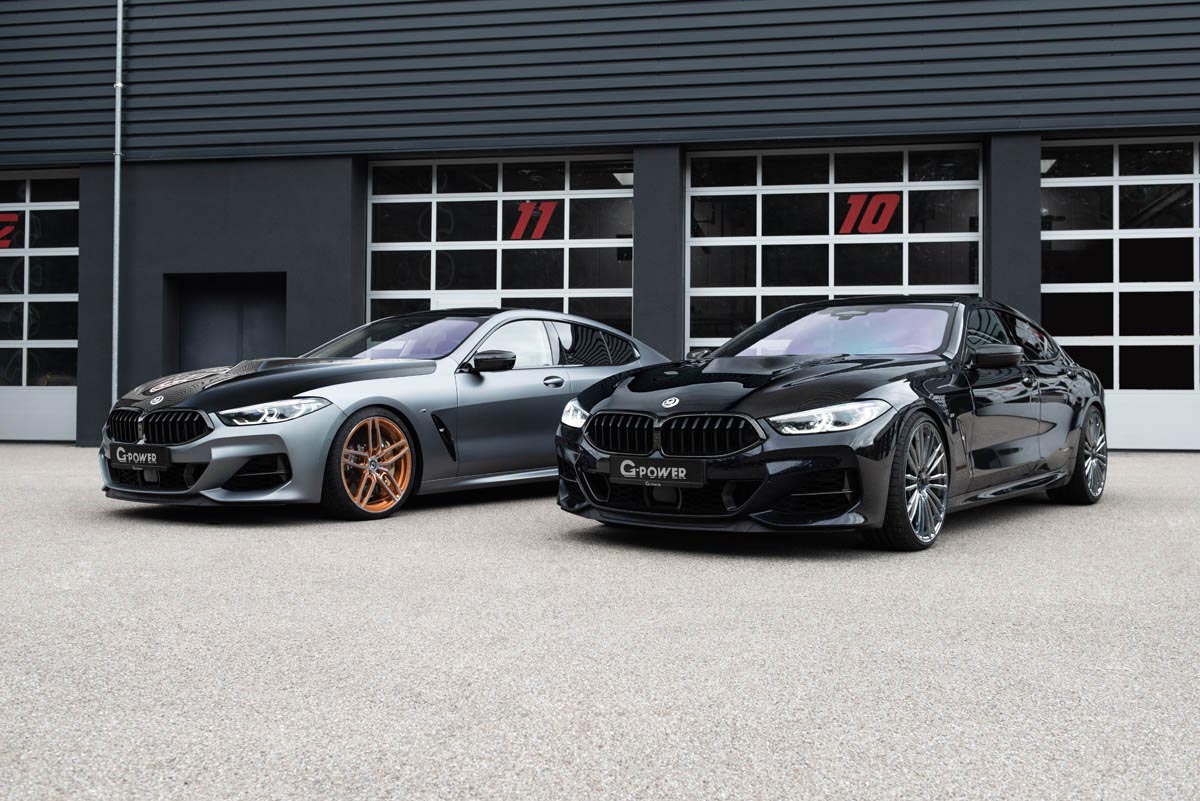 There is no question about it: what arouses the most enthusiasm and excitement
among BMW fans are the series top models with that magical letter M in the name.
And, of course, these cars are also high up on the list for the specialists at G-POWER
– a brand that has been offering impressive performance upgrades for BMW vehicles
for nearly 40 years. But the clear downside of these M fireballs is their astronomical
prices. The M8 Competition, for example, costs over €40,000 more than the M850i,
which – at 530 hp / 290 kW – is by no means a feeble specimen.
The M850i becomes even more attractive as a cheaper alternative to the M8 when
given the G-POWER touch, which elevates it to the level of its big brother in terms of
power: 620 hp / 456 kW is generated by the 4.4-liter N44B63 V8 after GP-620
performance software has been installed. The torque is also boosted significantly to
850 Nm, which is 100 Nm more even than the M8. At the same time, the costs are
substantially lower than the factory-fresh top model – even when the €2,495 for the
software (which is required in cars built 06/2020 onwards) and the €1,785 for the ECU
Unlock are added on.
And for those who want even more extreme values, GP-670 performance software is
offered as an alternative for the M850i and is obligatorily installed in conjunction with
sport downpipes and the GP-DEEPTONE rear muffler. This boosts the large BMW
coupe to a mighty 670 hp / 493 kW and 900 Nm. The muffler can, of course, also be
combined with GP-620 performance software. In both cases, the Vmax increase, the
adjustment of the digital speedometer to a scale of up to 330 km/h and the GP overrun
fuel cut-off are also available and, indeed, recommended.
In addition to the power boost for the eight-cylinder engine, G-POWER is also offering
various other enhancements for the M850i for a more individual look. The front can be
embellished with the GP-VENTURI engine hood RR made of carbon fiber, which is not
only a real eye-catcher but also increases ventilation of the engine space thanks to the
Dynamic Venting technology. The rear can be adorned with the GP-DYNAMIC Wing
RR, which is also manufactured from carbon fiber and which is exclusively available
for the two-door coupe.
And, last but not least, the tried-and-tested, ultra-light forged wheels from G-POWER
are also available for the M850i. Both the Design HURRICANE RR and the
HURRICANE RS rim can be installed in the combination 9”x20” at the front and
10.5×21” at the rear with 255/30 and 295/25 tires. As an alternative, the HURRICANE
RR also come in 9×20” and 10.5”x20” with 245/35 and 275/30 tires. In addition to the
standard finish in jet black, two diamond cut versions with partially or fully polished
fronts as well as a variety of other finishes from Individual Manufaktur are also
possible