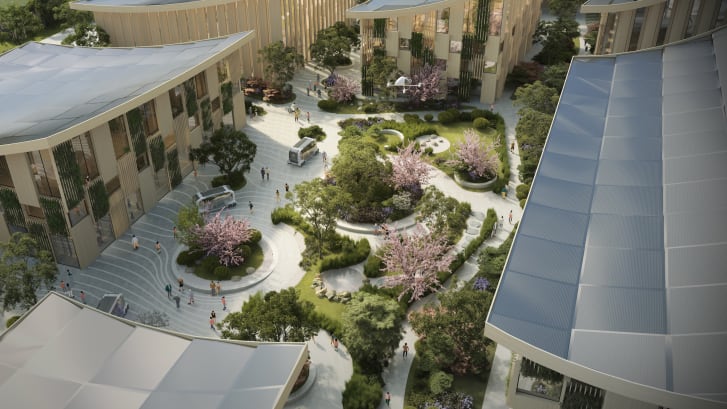 Toyota Reveals Plans to Build the Prototype City of the Future

Toyota Motor Corporation has announced plans to build a prototype “city of the future”. The city which serve as a laboratory for the automotive manufacturer’s “smart homes”, autonomous cars and other technologies will be built on a 175-acre site at the base of Mt. Fuji in Japan and will be powered by hydrogen fuel cells. The plan to build what Toyota calls the “Woven City” was announced by the company’s president, Akio Toyoda at a news conference held on the sidelines of the Consumer Electronics Show.

The term “Woven City” refers to Toyota’s origins as a loom manufacturer.

“It’s hard to learn something about a smart city if you are only building a smart block,” said James Kuffner, chief executive officer for the Toyota Research Institute-Advanced Development, told Reuters.
Toyota has been considering the “Woven City” concept for more than a year and it is being set up with the goal of creating safer, cleaner, more fun cities. It is believed that the learning lessons obtained from building such a city could be applied around the world.

The city will have schools as well as police, fire and ambulance services. It will serve as a place to house a mix of Toyota employees, retirees and others, according to Kuffner.
The “Woven City” will be built on the site of an automotive plant that is scheduled to close by the end of 2020. It is expected to begin with 2,000 residents in the coming years, and will also serve as a home to researchers.

Toyota did not disclose financial details of the project. Construction is scheduled to start in 2021.

While senior executives at many leading automakers have talked about how changes in future mobility could transform cities, Toyota is actually translating talk into concrete action. The ambitious project highlights Toyota’s financial and political strength, especially in Japan.

Toyota is not new to the business of building houses. Toyota Housing, a part of the company, has sold over 100,000 homes in Japan in 37 years.

Toyota said it had commissioned Danish architect Bjarke Ingels to design the community. Ingels is the architect who had developed the design for the 2 World Trade Center building in New York and Google’s offices in Silicon Valley and London.

Toyota has also said that it is open to working with other companies who might want to use the new city a test their technologies.