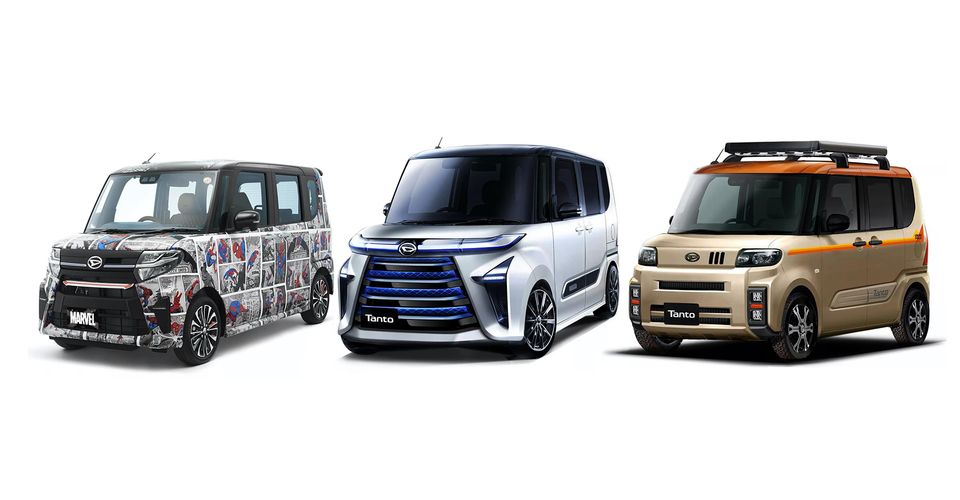 Daihatsu is all set to steal the show at the Tokyo Auto Salon with its tiny concept vehicles. The nine concept vehicles Daihatsu will showcase at the show are inspired by diverse influences, with the Taft being one of the most impressive. The Taft is an improvement on the Daihatsu Waku Waku concept that it had showed at the year’s Tokyo Motor Show, one that is more production ready. An acronym for Tall & Almighty Four-wheel Touring vehicle, Taft was the name that Daihatsu had used back in 1974 for a small Jeep-like 4 x 4. Now, the Japanese brand has used the very same name for a kei-car that it is positioning as “the world’s first light crossover” with its very own front-wheel drive and a CVT as standard options. More stylish than the Waku Waku, the Taft has a panoramic roof instead of the storage area in the upper deck of the Waku Waku and rear doors and windows instead of the orange interior panels and jerry can motif. It is also more conventional in terms of the front fascia and has less cladding.

Daihatsu will also present three variants of Tanto kei cars with three different front fascias. The Tanto Cross Field concept is an overlander that can be used as a family vehicle with a roof rack and a set of fog lights. The Tanto Custom Premium is described as a vehicle that “gives off an overwhelming presence with a fearless black face”. The Tanto Marvel Spider-Man concept is wallpapered in panels featuring themes borrowed from Spiderman.

There will also be three Hijet microvan concepts at the Daihatsu booth. The Hatsune Miku Marche concept will serve as a working coffee stand and pop-up store. Daihatsu made this in collaboration with the turquoise-haired, pony-tailed, “Vocaloid software voicebank” known as Hatsune Miku. Daihatsu worked with Peaks magazine to develop the Hijet Peaks which it calls “playable overlander”. The microvan comes with indoor climbing wall holds on the sides. To go with the Hijet Peaks, Daihatsu had a challenging bouldering course in the stand for kids from three to 12 years old. The Hijet Jumbo DJ will serve as a giant DJ booth, with DJ Kakushika making an appearance at the show to play a set in the Hijet’s bed.

Two production models will complete the lineup: The Rocky Sporty Style and the Copen GR Sport, which got a carbon-fiber-looking hood, rear spoiler, and black wheels and promises to be an “Aggressive driving machine with more sporty driving.” There were also production models kitted with variety of accessories. The show will be held from January 10-12 at Makuhari Messe in Chiba.