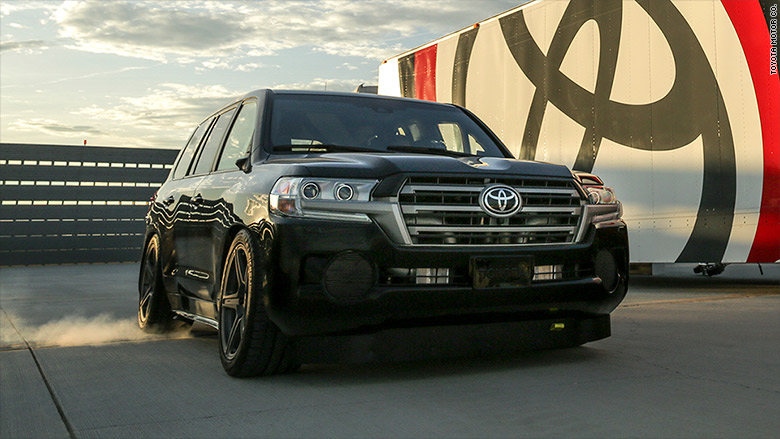 A Toyota Land Speed Cruiser SUV has broken the previous record for the “World’s Fastest SUV”, exceeding it by over 19 mph. It attained a GPS-verified and video-documented speed of 230.02 mph, according to a press release issued by Toyota. The vehicle was driven by former NASCAR driver Carl Edwards. The custom Land Speed Cruiser was fitted with a 2,000-horsepower engine.

“At Toyota, we like to say ‘Let’s Go Places,’ and the Land Speed Cruiser goes places faster than any SUV before it. This was an aspirational goal that inspired us all,” said Steve Appelbaum, Toyota Motor Sales national engagement marketing manager.
He added that the company achieved the record by using the same kind of innovative outlook and determination that have long been a part of Toyota’s soul. Toyota had launched the Land Speed Cruiser, at the 2016 SEMA show. The model had initially been a stock production model before it was heavily modified by a team of engineers at Toyota’s Motorsports Technical Center (MTC). The Toyota Land Cruiser is an iconic model that has now been in production for over 60 years now.

MTC Manager, Chuck Wade said that the previous World’s Fastest SUV record at 211 mph was extremely fast. This is why Toyota came up with a really, ultra-powerful Land Cruiser, to try and break the record.

The team used the Land Cruiser’s production 5.7-liter, V8 engine as the base model and then added a pair of volleyball-sized Garrett turbochargers which could add upto 55 PSI of boost. In order to help the engine cope with extreme force induction, the team at Toyota’s Motorsports Technical Center (MTC) made the interiors of the engine stronger with several components including stronger pistons and rods and a custom-made intake manifold. This helped the powerful modified V8 engine to produce the 2,000 horsepower needed for the vehicle’s record-breaking run. A custom racing transmission which could tolerate the high speeds and power was paired with the engine.

Driving the vehicle at such high speeds was also a challenge as high speeds affect a vehicle’s aerodynamics and stability. Hence, the modified Land Speed Cruiser sits lower to the pavement, and this reduces the amount of turbulent air that is allowed to pass underneath the vehicle. The frame was tweaked a little in order to maintain optimal suspension geometry, and was narrowed by 3 inches to accommodate the wider Michelin Pilot Super Sport tires.

The record breaking attempt was carried out at the Mojave Air and Space Port in Mojave, California, as it is one of the very few places in the U.S. where supersonic flight is allowed, and has a two-and-a-half-mile paved runway that was perfect for making the attempt.

“At 225 mph, the thing was wandering a little bit. All I could think was that Craig said, ‘No matter what, just keep your foot in it,’ and we got 230 mph,” Edwards recounted from behind a huge grin after setting the record. “It’s safe to say that this is the fastest SUV on the planet.