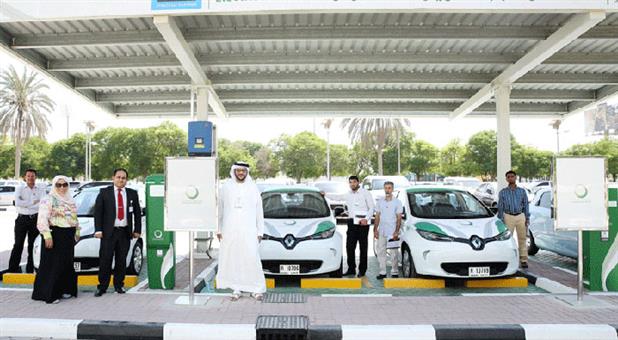 Sharjah is set to be a greener emirate with the inauguration of two new electric vehicle charging stations at Al Qasba, which is one of the leading leisure and family destinations in Sharjah. The two stations were set up as part of Sharjah’s green parking initiative, which the Sharjah Investment and Development Authority (Shurooq) recently launched in a bid to promote a sustainable ecosystem in the emirate.

With the inauguration of the two new charging stations, the government is hoping to promote awareness about the role electric vehicles play in reducing the level of harmful emissions, reducing the carbon footprint and in preserving the environment. Al Qasba’s management wants to highlight the role played by green parking, and electric vehicle charging stations are a main component of this initiative in order to get the public to adopt sound environmental practices.

Commenting on the initiative, Sultan Mohammed Shattaf, Manager of Al Qasba said that the launch of green parking in Al Qasba will significantly boost the Sharjah government’s efforts to adopt more sustainable methods and highlight the emirate’s status as an eco-friendly city. Electric vehicles are bound to become more popular in the near future and he expects the number of charging stations to increase correspondingly in Sharjah, with more stations to be installed at Al Qasba as needed.

He added that this initiative is of particular importance to Al Qasba as it is a major tourist attraction and visitors will become more aware of the significance of sustainability and the measures needed to conserve the environment. Motorists who use electric vehicles can now benefit from free recharging service while they enjoy the visit to Al Qasba’s facilities, which include cafes, restaurants, kids’ areas and theatre.

In order to showcase the recharging technique, as part of the official inauguration ceremony for the two new electric vehicle recharging stations, a pair of i8 BMW electric cars were parked in Block A and Block D respectively. An expert in electric cars was also on hand to take questions from the audience and explain how the vehicles work, giving more details about their technical aspects and the parts that are used as part of the manufacturing process.