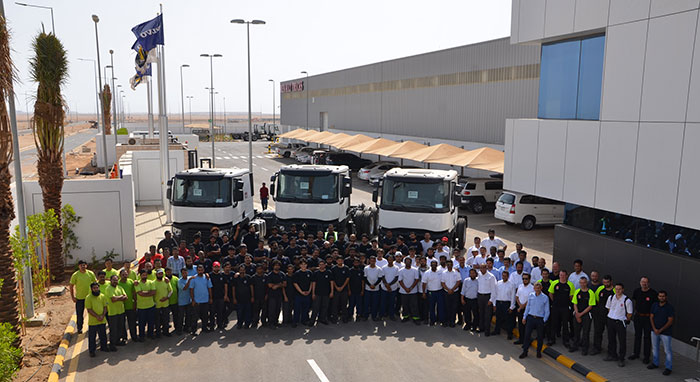 Renault Trucks marked a new era in the company’s history in the MENA region when it assembled its first C & K range models at its new state of the art joint venture factory named Arabian Vehicles & Trucks Industry Co. Ltd. (AVI), which is located in King Abdullah Economic City (KAEC).

This marked a milestone for Arabian Vehicles & Trucks Industry and Renault Trucks and the first trucks built in Saudi were jointly assembled by a team of engineers, technicians, quality alogistics personnel trained by Renault and a local AVI team .

Commenting on the achievement, Lars-Erik Forsbergh, Renault Trucks Middle East President said that the company’s facility in KAEC solidified its commitment to provide strong transport solutions throughout the Middle East rgion. He lauded the support the company got from its local importer Zahid Tractor and AVI and expressed his hope that they would be able to set new standards in the regional trucking industry.

He added, “We are delighted to see the first of many Saudi-built Renault Trucks roll off our assembly line. Although the facility layout derives from our group’s lean manufacturing production system, this milestone could not have been achieved without the efforts of our highly-trained Saudi workforce.”

AVI’s factory in King Abdullah Economic City (KAEC) was designed by a project team from the Volvo Group Truck Operations (GTO), which consisted of process owners and engineers drawn from different brands coming under the group’s fold. The new airconditioned assembly facility in KAEC has been been designed in line with the latest ergonomic guidelines and all the equipment, fixtures, tooling, driven line, crane structures, special racking on the assembly line, proven tightening tools and equipment for moving and lifting have been specially designed for optimum performance. The factory is expected to produce 4,000 trucks every year for both the Volvo and Renault brands, thus becoming the first facility in the world to manufacture both Renault and Volvo trucks on the same assembly line.

The facility will produce all the trucks belonging to the new range from Renault Trucks including the robust models for the heavy construction sector and the durable C Range aimed at the long haul and construction sectors. The factory will have employees from perse backgrounds including Saudi nationals who will deal with planning, logistics, operations, engineering, quality control and production.

King Abdullah Economic City (KAEC) is in a strategic geographical position with a state-of-the-art deep-water port on the Red Sea shore, that can tackle the largest ships in the world and close links to new road and rail networks, that makes travel easy to the main cities of Jeddah, Mecca, and Medina. the AVI factory which is in the heart of the industrial zone is one of the firstand biggest completed, fully functional projects in KAEC.