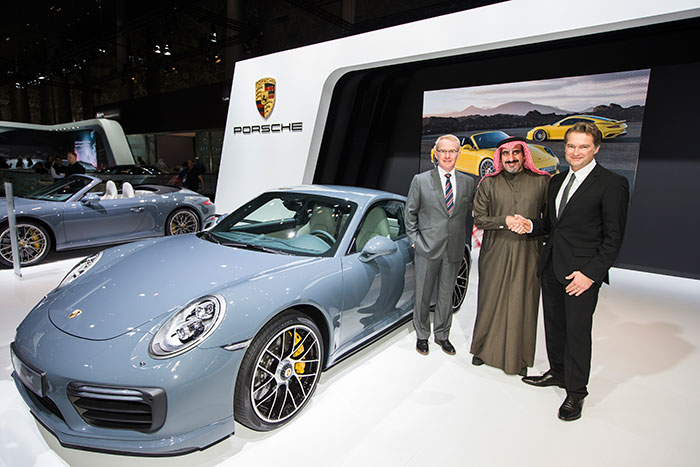 Porsche debuted the new 911 range and Macan GTS at the Qatar Motor Show 2016 to make a total of four regional debuts at the ongoing event. The 911 launches included the new 911 Carrera 4S, 911 Targa 4S and 911 Turbo S which further solidified the reputation of the 911 range as the best-selling sports cars of all time.

Porsche used the show as the platform to showcase its evolution as a brand over the past 50 years with an array of models on display at the stand including the 911 models, and the sporty and dynamic Macan GTS.

Deesch Papke, Chief Executive Officer of Porsche Middle East and Africa FZE, said that the Porsche 911 is the brand’s most iconic model and the three new variants offer customers more power, more stylish design and more driving excitement. Through continuous transfer of technology from the racing arena, the 911 range has scaled new heights and the company is celebrating a landmark moment with the premiere of the all-new Macan GTS as it now has a dynamic GTS version for every model series.

The new 911 Turbo S is the most powerful performer in the 911 range. The 3.8 liter twin-turbo six-cylinder engine has an output of 580 hp due to the new turbo chargers having larger compressors. This makes the Turbo S the first production 911 having the capacity to go from 0 to 100 km/h in under three seconds, as it can do so in 2.9 seconds. It has a top speed 330 km/h, 12 km/h more than that of the previous versionr.

The same 911 Carrera 4S and 911 Targa 4S also made their regional debuts at the Qatar Motor Show. They have been equipped with the completely new engine generation having bi-turbo charging. This has increased the power output by 20 hp across all models. Another notable improvement is the sleek look of the exterior in the new 911 models. They have new headlights with four-point daytime running lights, a revamped rear lid with vertical louvres, in addition to distinctive four-point brake lights at the rear. The interior has an updated Porsche Communication Management (PCM) system with a multi-touch display, which offers drivers a wider range of functions and intuitive controls.

The new Macan GTS is the latest addition to Porsche’s SUV range, and is positioned as the sports car among compact SUVs. It comes with a 3.0 litre V6 bi-turbo engine having an output of 360 hp, a Porsche Doppelkupplung (PDK) and Porsche Traction Management (PTM) for flexible distribution of power between the front and rear axles. It has a top speed of 256 km/h and motorists using the optional Sport Chrono package can go from zero to 100 km/h in 5.0 seconds.