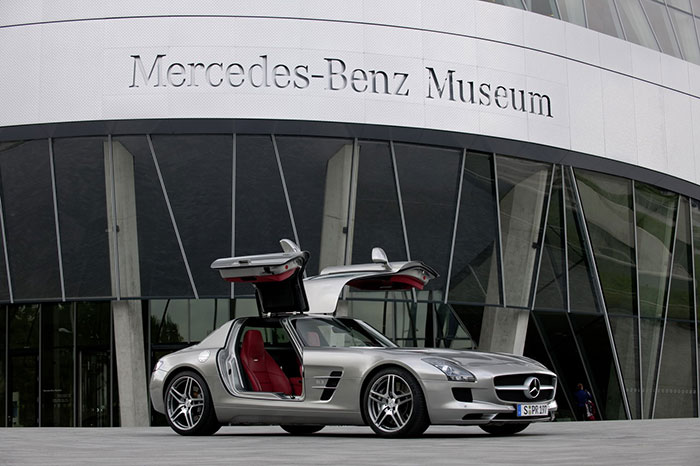 The Mercedes Benz Museum has provided years of delight to auto fans across the world with special events and exhibitions. The museum will begin its countdown to its 10 year mark on the 130th birthday of the automobile, which falls tomorrow and marks the day when Carl Benz registered his patent for a “gas-powered” vehicle. The Mercedes-Benz Museum will mark the anniversary with a series of themed guided tours and a special presentation. The actual anniversary of the establishment of the museum will be commemorated on 19 May 2016, with a special exhibition about the E-Class. The main celebrations will be held over the weekend of 4 and 5 June 2016 under the theme “A Future always needs a past”. In the past ten years, over 7.1 million visitors drawn from 160 countries have visited the venue.

The Museum first opened its doors to the public on 19 May 2006, after two and half years of constructionand is located just outside the gates of Daimler’s Untertürkheim factory and has ever since set new benchmarks when it came to its architecture, exhibition concept and events.

On 29 January 2016, there will be hourly themed tours on special subjects like Silver Arrows, the automobile, Bertha Benz, commercial vehicles, the architecture of the museum and Women and Cars. There will also be a special presentation covering the first ten years of the Mercedes-Benz Museum.

Over the coming months, there will be many special shows including those on safety cars, an exhibition for children, an animated film festival and Bonhams Auction to mark the anniversary year.

The museum has long been a popular destination for automotive fans across the world. , with a display of 160 vehicles and over 1500 exhibits which cover an area of 16,500 square meters. The Mercedes-Benz Museum traces the history of the brand and indeed of the entire car industry, right from the invention of the automobile by Carl Benz and Gottlieb Daimler in 1886 to the models of the present day.

The building is a spectacular landmark with its architecture that has won multiple awards. It was designed by the Dutch architectural practice UNStudio and the exhibition concept was developed by the Stuttgart-based museum designer HG Merz. Exhibitions are held over nine levels, and the paths wind in the shape of a double helix along a time axis stretching from the invention of the motor car to the present day. The Mercedes-Benz Museum is constantly evolving with a varied program of events that cover a broad range of topics. Together with the permanent display and changing special exhibitions, this is a significant factor in ensuring that guests from all over the world not only enjoy visiting the Mercedes-Benz Museum but also keep returning to the Museum.