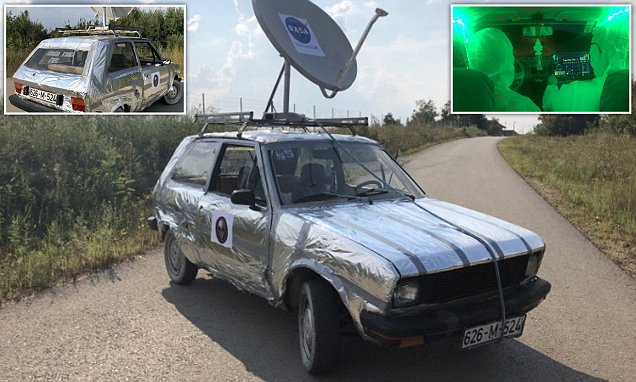 The owner of a vehicle in Bosnia and Herzegovnia has posted an online as for a car he calls “alien-proof” with an asking price of GBP 450. The car is a Yugo 1984 model that is essentially wrapped in tinfoil and was listed for GBP 450.

The Yugo is a model that was made by Zastava Automobiles in the period from 1977 to 2008 in former Yugoslavia and was termed by Car Talk as the “worst car of the century”. Many other publications have called it a bad car, but it is quite popular in the countries that were a part of Yugoslavia like Slovenia and Croatia as it is cheap and easy to fix.

The owner touted the car as the “Yugo 45 Space Warrior” and said that the silver foil and a ‘NASA’ satellite dish on its roof made it alien-proof as its coating made the vehicle impossible to identify by UFO radars. His ad has now gone viral.

The text of the advertisement calls the Yugo 1984 model ‘A vehicle designed as a limited series of specialized combat vehicles for a fight against unknown space objects’. The vehicle has been driven for 22,369 miles (36,000km) and comes with other “facilities” like electric windows, air conditioning, electric windows, electrically adjustable seats, and parking sensors. It even has a ‘multi-functional steering wheel’, though we do not know exactly what “multi-functional” refers to.