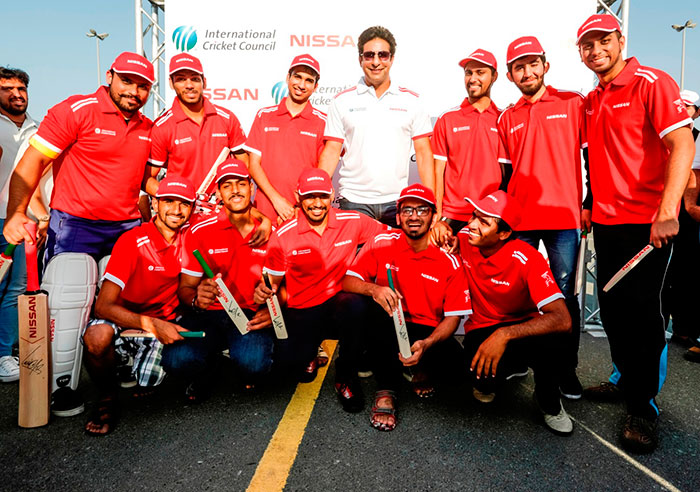 Nissan Goes to Bowl with Wassim Akram in Dubai

Cricket is one game that is highly popular in the UAE. With a huge number of expats from the Indian subcontinent, UK, South Africa and Australia, many public parks and public areas serve as the venue of impromptu cricket matches on weekends. Recently, a few amateur players in Dubai were pleasantly surprised when none other than renowned Pakistani bowler Wasim Akram, unexpectedly turned up and joined their game, all thanks to Nissan.

Akram arrived in a Nissan Altima to join the street game and to give the players the most pleasant shock of their lives. Within a few minutes of his arrival, a “pop-up” pitch was set up and the former Pakistani cricketer enthusiastically joined in the match.

Commenting on the event, Samir Cherfan, Nissan Middle East’s Managing Director said that this is exactly the kind of exciting thing Nissan likes to do to engage with people on a personal level and help put smiles on their faces. The love for cricket effortlessly overcomes all barriers of religion, class and nationality and serves as a perfect showcase of Nissan’s appeal as a global car manufacturer. This why Nissan became a partner of the International Cricket Council

He added, “By taking a keen interest in what people do for their own enjoyment, in their spare time, we can impact on lives in the most positive way. As a company we promise ‘Innovation that Excites’ and this was a perfect opportunity for Nissan to do something out of the ordinary and create #MomentsThatCount.”

In addition to setting up a pop-up cricket pitch, the Nissan team came fully loaded with world class equipment for the street players including helmets, gloves, flags, stumps, kit bags, sweater bands, balls and, the best ever English Willow bats that were autographed by Wasim Akram. This equipment was given away as gifts to the players.

The activation not only gave the street players a chance to play the game with one of the best bowlers in the world but they also got a chance to get a few tips on the game from Akram and keep a few permanent mementoes from the occasion. Cherfan expressed his hope that eventually some of the players would be inspired to take their hobby to the next level.

Back in October 2015, Nissan had signed an eight-year sponsorship deal with the International Cricket Council (ICC) as a global sponsor of cricket’s international tournaments.

The sponsorship deal covers a number of tournaments including the ICC World Twenty20, ICC Cricket World Cup, ICC Champions Trophy and, as well as ICC Under-19, ICC Women’s and Qualifying events. The ICC partnership is a significant expansion of Nissan’s ongoing international sports sponsorships.

Wasim Akram’s stopover at the street cricket match was not staged in any way and the footage of the match can be seen by clicking on http://youtu.be/SV-1zASVayk.