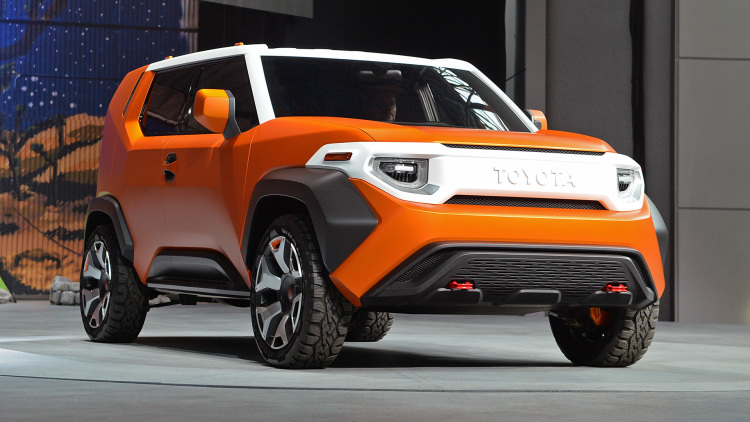 Toyota used the New York Motor Show to present a new concept vehicle named the FT-4X. According to the company, it is a 75 per cent production ready vehicle and is inspired by the FJ Cruiser. The FT in the name of the vehicle stands for “Future Toyota” and the vehicle has many features that will appeal to the millennial generation who long for creature comforts and yet dream of getting away to enjoy the great outdoors. The “4X” in the name represents its all-wheel drive capabilities.

The concept vehicle was designed at the company’s Calty Design Research lab in Newport Beach, California and uses the TNGA platform, which has been also used for the 2018 Camry and the .C-HR Crossover. Practicality reigns supreme with plenty of nice features like big wheels with all-season tires, clever storage spaces, USB outlets into the armrests, door handles that double as removable water bottles, in-cabin lights that are detachable and can be used as flashlights, an armrest that can be converted into a sleeping bag, a detachable audio system that can function as a boom box and a Go-pro camera which is mounted on one of the side mirrors. The removable window glass, second-row seats that fold down and a suspension that can make the ride comfortable with its ability to cushion occupants against the effect of rocks and potholes are other bonuses.

What is most interesting about the vehicle is its rear hatch that can be opened in two different ways. Called a Multi-Hatch, it comes with a large rotating handle that allows users to choose from one of two modes. In an urban setting, the split door option can be used while it can be used as a one piece hatch on more adventurous trips. A chunky rotating handle allows the user to switch between the two opening styles. The flat roof makes it easy to load extra cargo on top.

Within the interiors, there is only a single screen that functions as the main instrument cluster. Instead of a navigation touchscreen, there is a dock above this screen for a smartphone which many people now use for navigation.

The FT-4X did not have a powertrain, though there is adequate space in the engine bay to accommodate a low-displacement inline-4 engine. Toyota is chiefly popular for its sedans like the Prius, the Corolla and the Camry. With the new concept vehicle, the company is aiming to move into crossover territory and appeal to young urban professionals with a busy lifestyle and plenty of disposable income. This is targeted at members of Generation Y who the company says like the idea of “venturing into new neighborhoods and national parks, but hardly plan ahead” and would prefer smaller, more fuel-efficient SUVs.

In order to come up with the design of the concept vehicle, Toyota California design boss Kevin Hunter said that his team of designers held conversations with Millennials in the Bay area to learn more about their preferences.