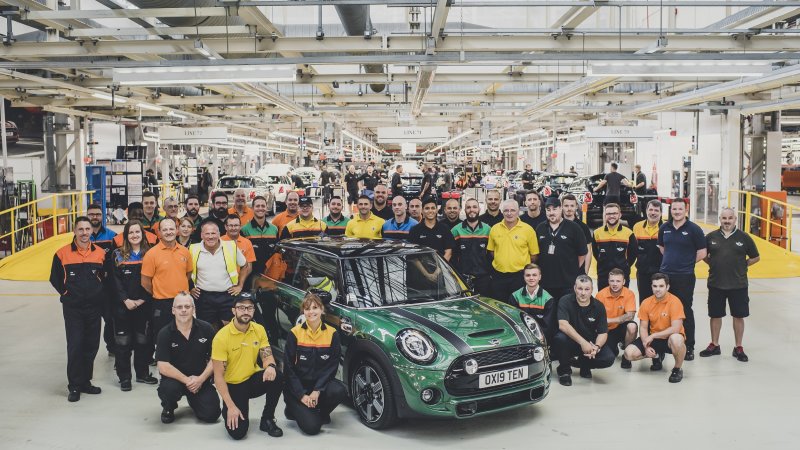 Mini recently celebrated a major milestone at its factory in Oxford when the plant made its 10 millionth car. It also celebrated the 60th anniversary of the debut of the Mini Cooper model. The milestone car was a limited-edition 60 Years-badged model. The model was based on the two-door Cooper S, and hence it is powered by a 2.0-liter four-cylinder engine that was turbocharged to produce 192 horsepower. The car also had several little touches that only the 60th anniversary special edition had like brown leather upholstery with green accents, special decals and logos, and 17-inch alloy wheels which were specially designed for the model.

The 10 millionth Oxford-built car joined a 61-car convoy that made an 84-mile trip from the Oxford factory to Bristol to attend the International Mini Meet on August 11 as soon as it came off the production line. For the convoy, it was joined by the first Mini that was ever built, a white Morris Mini-Minor, which led the convoy for the meet. These two cars were joined by an example made during every year of the model’s unusually long production run.

Mini had made 5.3 million units of the original Mini which was made between 1959 and 2000, but not all of them were made at the facility in Oxford, and none were sold under the Mini brand. The current Mini brand was created by the brand’s parent company BMW in late 2000 when it launched the first-generation Cooper (the car currently known as the Hardtop). The model’s predecessors include over a dozen variants including the Austin Seven, Austin Mini, Innocenti Mini, Morris 850, Riley Elf, and Rover Mini.